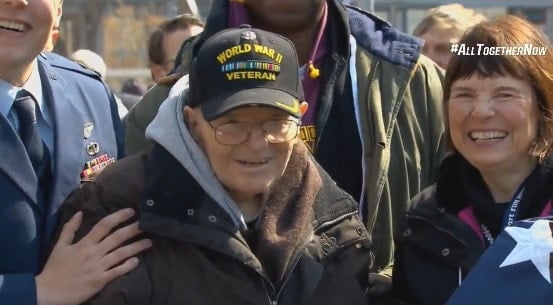 This might be the best thing we’ve seen in the young Major League Baseball season. Ahead of the Minnesota Twins’ home game against the Seattle Mariners, the team paid tribute to a true American hero.

On hand at Target Field was none other than World War II vet and Purple Heart recipient Robert O’Connor. Wounded twice during his tour of duty in the Philippines, O’Connor raised the American flag prior to the game.

It’s about as emotional and stirring of a moment that we’ve seen at a baseball game in some time. Check it out below.

Private Robert O'Connor, a WWII veteran and Purple Heart recipient who survived a mortar strike and was surrounded by the enemy before his unit could rescue him, raised the flag at today's @Twins game.

There’s really not a whole lot more we can add to this. One of the few surviving World War II veterans, O’Connor deserves all the praise that’s been handed to him. He’s a true hero. And it’s his sacrifice that enables us to live with the freedoms we see today.