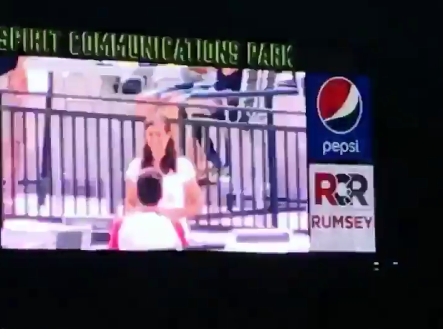 On Monday night during a Columbia Fireflies game, one poor guy was left kneeling after popping the question to his beloved in a failed ballpark marriage proposal.

There were many who wondered if the entire thing was staged, but based on the way it all went down it appears to have been a very real event.

Uh oh, marriage proposal in top of 7th goes wrong. Lady storms up steps and looks like she might be gone. Didn't look happy

More than that, one of the staff at Spirit Communications Park is said to have confirmed that the proposal was not staged. Video was also taken of the event, and the woman appears to have a legitimate look of “Oh, no, you did not” on her face.

Of course, one of the general sentiments was that Tim Tebow might be able to make things right between this guy and his gal, but we’re not too sure about that.