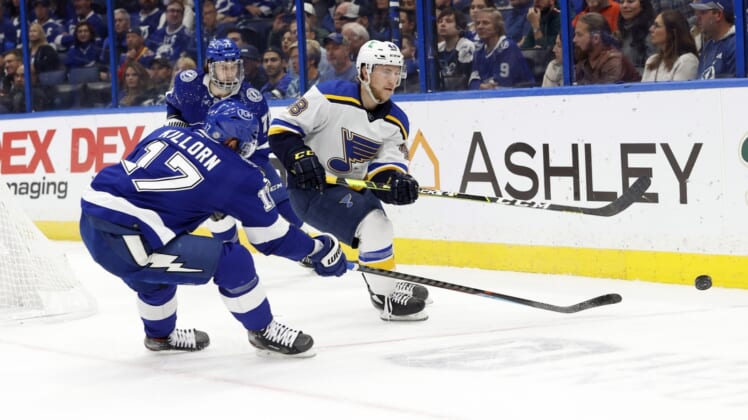 Victor Hedman scored twice in the third period as the Tampa Bay Lightning earned a split of the season series with St. Louis, beating the visiting Blues 4-2 on Thursday.

With the game tied 2-2 near the midway point of the third frame, Hedman’s long slapper broke the match’s second tie.

His drive and forehand tally from in close 2:20 later gave the Lightning their first two-goal margin at 10:29.

Ondrej Palat and Anthony Cirelli also scored as Tampa Bay bounced back from a 4-3 shootout loss in St. Louis on Tuesday.

Tampa Bay won its fourth straight on home ice and has six wins in the last seven there.

After getting Tuesday’s game off, goalie Andrei Vasilevskiy was back and stopped 26 of 28 shots.

Alex Killorn played in his 663rd game for the Lightning, breaking a tie for fifth place with Pavel Kubina for the most in franchise history. Zach Bogosian played in his 700th NHL game.

Brandon Saad and Pavel Buchnevich notched goals, and Robert Thomas and Scott Perunovich each added two helpers for St. Louis, which lost for the first time in six games against the Eastern Conference team.

With No. 1 goalie Jordan Binnington placed in COVID-19 protocol earlier in the day, backup Ville Husso started and surrendered four goals on 35 shots.

In the first period, Ross Colton’s pass through the crease from the right side found its way back to Palat, who shoveled in his fifth goal of the season at 7:16.

Tampa Bay went on the game’s first power play late in the frame after Niko Mikkola went off for two minutes for high-sticking Alex Barre-Boulet. But the Stanley Cup champs generated only one shot on Husso, and the Blues’ penalty-kill unit kept it a one-goal game.

In the second, St. Louis gained momentum and tied the game on its second power play. With Barre-Boulet in the box for tripping, Thomas threaded a perfect pass through the skates of Hedman. Camped all alone in the low slot, Saad easily tapped in his ninth tally at 14:07 to make it 1-1.

On their third man advantage, Cirelli took a pass from Killorn and fired home his eighth goal at 4:26 of the third, but Buchnevich blasted a power-play goal off the stick of Lightning defenseman Erik Cernak at 7:16.