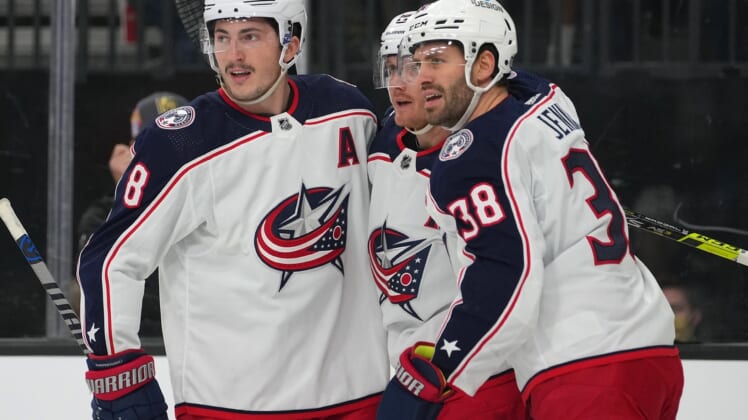 Mattias Janmark scored the go-ahead goal and Laurent Brossoit made 27 saves as the host Vegas Golden Knights rallied from a 2-0 deficit to defeat the Columbus Blue Jackets 3-2 on Saturday night.

Keegan Kolesar had a goal and an assist, and Reilly Smith scored his second short-handed goal of the season for Vegas which finished its six-game homestand with a 5-1 mark.

Columbus needed just 45 seconds to take a 1-0 lead when Nyquist deflected Bean’s shot from the left point past Brossoit’s glove side for his third goal of the season. Werenski picked up an assist on the goal for his 200th career NHL point.

Texier made it 2-0 midway through the period with the first short-handed goal of the season for the Blue Jackets. Texier took the puck up the right boards and then put the puck between the legs of Vegas defender Mark Stone before cutting in front of the crease and beating Brossoit with a shot under his blocker for his sixth goal of the season.

The Golden Knights cut it to 2-1 midway through the second period on Kolesar’s first goal of the season. The score was set up by Jake Leschyshyn, who intercepted Boone Jenner’s pass behind the net and then backhanded a pass to Kolesar alone in the slot where he rifled a shot into the top right corner.

Smith tied it at the 4:45 mark of the third period with a short-handed breakaway goal, cutting off a pass in his own zone and then beating Merzlikins with a wrist shot on his blocker side for his seventh goal of the season.

Janmark then gave Vegas its first lead at the 13:53 mark when he tucked in a rebound of a Nicolas Hague shot around the left post for his first goal of the season and the game-winner.