Atlanta’s Trae Young torched the visiting New York Knicks for 27 points and led the Hawks to a 113-96 win in Game 4, giving them a 3-1 lead in the series.

Young added nine assists and made four 3-pointers, raising his scoring total to 110 points in the series.

Atlanta extended its home winning streak to 13 games, the longest active streak in the NBA.

Atlanta’s John Collins finished with 22 points and eight rebounds and played the fourth quarter with a lip laceration suffered after being elbowed by Julius Randle. The foul was initially called on Collins, but the play was challenged by Atlanta coach Nate McMillan and overturned by replay.

The Hawks also got 21 points off the bench from Danilo Gallinari, 12 points from Bogdan Bogdanovic, 11 from Kevin Huerter, and 10 points and 15 rebounds from Clint Capela.

New York was led by Randle with 23 points, on 7-of-19 shooting, with 10 rebounds and seven assists. R.J. Barrett scored 21 and Derrick Rose added 18 points and six assists.

The Knicks led 26-25 after the first quarter and Atlanta held a 53-49 lead at halftime. 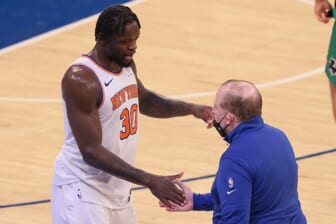 The Hawks broke the game open in the third quarter by outscoring the Knicks 35-22. They extended their lead to 88-71 when Bogdanovic hit his fourth 3-pointer with 2.5 seconds remaining in the period.

New York got as close as 90-74, but Atlanta scored seven straight points, including a 3-pointer by Huerter and a Gallinari dunk, that stretched the advantage to 97-74.

Tensions remained high throughout the contest. New York’s Reggie Bullock was called for a technical foul during a timeout with 3:30 left when he sprinted toward the Atlanta bench and had to be restrained by teammate Alec Burks. Less than a minute later, Randle was whistled for a Flagrant One on a foul against Gallinari.

There were 14 lead changes and six ties in the first half.