“Playoff Randle” chants were heard throughout State Farm Arena in Atlanta Sunday afternoon as Julius Randle and his New York Knicks laid another egg against the Hawks in Game 4 of their NBA Playoff series.

After struggling big time through the first three games, Randle was nowhere near up to the task in what was a must-win game for the surprising Knicks.

The NBA’s Most Improved Player shot just 7-of-19 from the field while committing five turnovers. While he did finish with a team-high 23 points, the Knicks were minus-17 with Randle on the court in what ended up being an ugly 113-96 loss.

A bad four-game stretch should not define Randle’s season with New York. He ended up being a legitimate NBA MVP candidate as the regular year drew to a conclusion. Even then, the forward’s disappearing act in the playoffs has to be seen as troublesome.

No one expected these Knicks to make the playoffs this season. Whatever happens from here on out is nothing more than icing on the cake for what was their best performance since back in 2013.

Even then, what we’ve seen from Julius Randle during the playoffs must have New York’s brass rethinking a lucrative long-term extension.

It was back in early May that reports suggested the Knicks were committed to signing Randle to a long-term contract extension.

“With a non-guaranteed contract for next year and a new regime in New York, Randle was seen as a likely trade target by league executives just a few months ago,” ESPN’s Brian Windhorst noted. “While the Knicks now focus on a vital road trip in which they look to lock up their first playoff berth in eight years, another priority has emerged on the horizon.”

The complexities here include a non-guaranteed salary of $19.8 million for the 2021-22 season. Even with his recent struggles, that’s a major bargain.

However, New York can only offer Randle $106 million over four seasons on a new deal due to NBA contract limitations. That’s despite the fact that these Knicks are estimated to have roughly $60 million to spend under the cap once the summer comes calling. 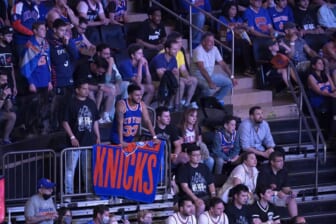 Randle, 26, must believe he’s worth more than $26.5 million annually on a new contract. After all, the former Los Angeles Lakers lottery pick averaged 24.1 points, 10.2 rebounds and 6.0 assists during what was a tremendous regular-season performance.

All things equal, the Knicks would be alright with paying Randle that $19.8 million price tag under his current contract. Heck, the aforementioned $106 million deal could also make sense. With that said, there’s other factors in play here.

As noted above, president Leon Rose and Co. will have an estimated $60 million to spend once free agency opens. If the Knicks were to make a move or two, they’d be able to add two max-contract players — either via trade or free agency.

New York has been liked to young New Orleans Pelicans guard Lonzo Ball on a near never-ending loop. He’s said to be looking at $20 million annually on a new deal. Adding him to the mix with Randle, R.J. Barrett and studly young guard Immanuel Quickley would be nice. It would also enable New York to add a max-contract player in a market that’s not favorable to other teams.

What does this all mean? New York might very well be better off letting Julius Randle play out the final year of his current contract. It would be the team’s way of finding out if the 2020-21 regular season was a fluke.

That’s better than committing $106 million to a player who has proven he’s not the No. 1 option on a true title contender. What we’ve seen from Randle through the first four games of the Hawks’ series adds another layer to this.