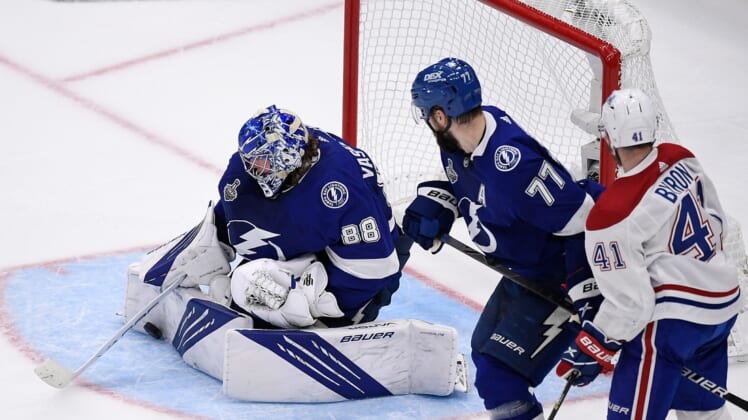 The Lightning, who claimed their third championship in franchise history, won the best-of-seven Final series in five games. Tampa Bay won its first title in 2004.

Vasilevskiy made 22 saves for his fifth shutout in this year’s title run and the sixth of his career in the postseason. The 26-year-old Russian recorded a shutout in all four series-clinching victories this year, and he has blanked the opposition in five consecutive series clinchers dating back to last year’s Cup-winning finale against the Dallas Stars.

Carey Price stopped 29 shots for the Canadiens, who saw their Cinderella run come to an end. The Canadiens were the lowest-ranked club to reach the playoffs, but they delivered a trio of upset victories en route to facing the Lightning for the crown.

Watch the highlights below:

However, they didn’t have enough to upset the defending champions, who were especially the superior squad in the opening frame and third period.

No Canadian team has claimed the Cup since Montreal earned its last championship in 1993.

Colton’s first goal of the series finally opened the scoring past the midway point. Colton was parked at the front of the net and neatly redirected David Savard’s pass right to his stick in the crease at 13:27 of the second period. His fourth goal of the playoffs set a franchise record for most playoff goals by a rookie.

The lack of goals didn’t mean there was a lack of scoring chances. Price, who held his team in the game during a one-sided first period dominated by the Lightning, was especially strong with a saves against Nikita Kucherov and Ondrej Palat late in the second period.

Vasilevskiy, although not as busy as his counterpart, denied Artturi Lehkonen’s rebound chance early in the second period, stopped Josh Anderson’s partial breakaway early in the third period and held strong in the dying seconds while the Canadiens frantically pushed for the equalizer.