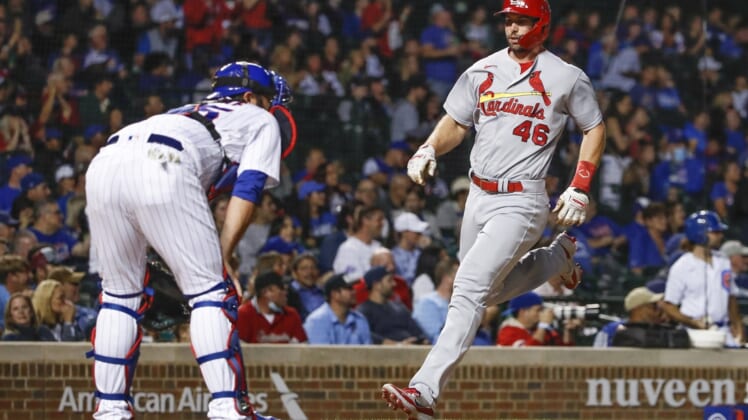 Tyler O’Neill and Lars Nootbaar drove in three runs each to drive the visiting St. Louis Cardinals past the Chicago Cubs 12-4 Friday for their 14th consecutive victory.

The Cardinals (85-69) completed a doubleheader sweep of the Cubs while tying their 1935 team for the longest winning streak in franchise history. They increased their lead over the Philadelphia Phillies to five games for the second wild-card spot.

Reliever Dakota Hudson (1-0) stepped up in his return from Tommy John surgery to pitch 3 2/3 innings. Hudson allowed two runs on four hits in his first game since last Sept. 17.

The Cubs cut the lead to 3-2 in their half of the inning. Frank Schwindel hit a one-out single and Patrick Wisdom followed with a two-run homer.

When Flaherty walked Ian Happ, Hudson came in to get the Cardinals out of the inning.

In the second inning, Hudson and Goldschmidt hit singles and O’Neill followed with a three-run homer to put the Cardinals up 6-2.

Nootbaar and Paul DeJong hit solo homers to make it 8-2 in the third inning. Happ countered with an RBI groundout in the bottom of the inning.

Nootbaar’s RBI single in the fifth inning made it 9-3. Happ’s sacrifice fly in the bottom of the inning cut the margin to 9-4.

Solo homers by Bader and Nootbaar and an RBI double by Goldschmidt in the ninth pushed the lead back to 12-4.