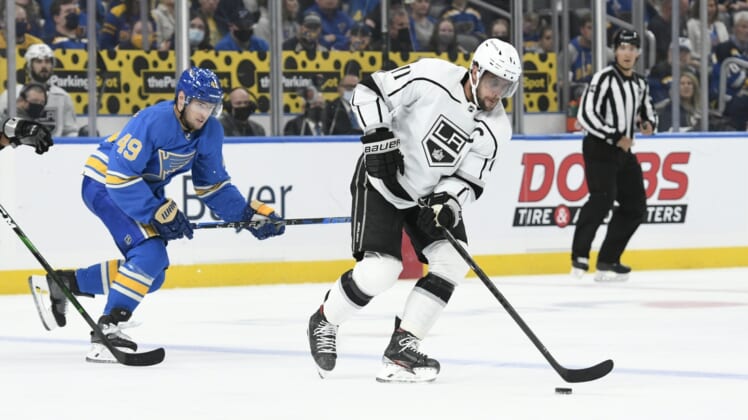 David Perron scored a hat trick and added an assist as the St. Louis Blues won their home opener 7-3 over the Los Angeles Kings.

Ivan Barbashev, Jake Neighbours, Ryan O’Reilly and James Neal also scored for the Blues, who have started the season 4-0 while outscoring their opponents 22-11.

Torey Krug earned three assists, and Brayden Schenn and Vladimir Tarasenko had two helpers each for the Blues. Goaltender Jordan Binnington made 32 saves.

Alex Iafallo, Dustin Brown and Carl Grundstrom scored for the Kings, who are winless in their last four games. Calvin Petersen made 33 saves in defeat.

The Kings struck first with Iafallo’s wrist shot from the left faceoff dot 11:29 into the game.

Perron tied the game 1-1 on the power-play. He blasted a one-time shot from the last circle off Krug’s pass from the center point.

Barbashev put the Blues up 2-1 with a short-handed goal with 1:13 left in the first period. Marco Scandella broke up a Kings rush, then Barbashev broke in to beat Petersen with a backhand shot.

The Blues extended their lead to 3-1 just 45 seconds into the second period. Klim Kostin circled the net and fed Krug, whose blast deflected in off Perron.

Neighbours made it 4-1 with his first NHL goal. He came off the bench, raced to the net and converted Schenn’s centering pass.

O’Reilly converted tic-tac-toe passing for the power-play goal that put the Blues up 5-1. Neal tapped in Robert Thomas’ power-play pass 38 seconds into the third period to make it 6-1.

Just 55 seconds later Brown countered for the Kings to cut their deficit to 6-2. Grundstrom followed his own deflection with a rebound conversion to pull the Kings within 6-3.

Perron scored another power-play goal, this time with a one-time shot set up by Tarasenko.