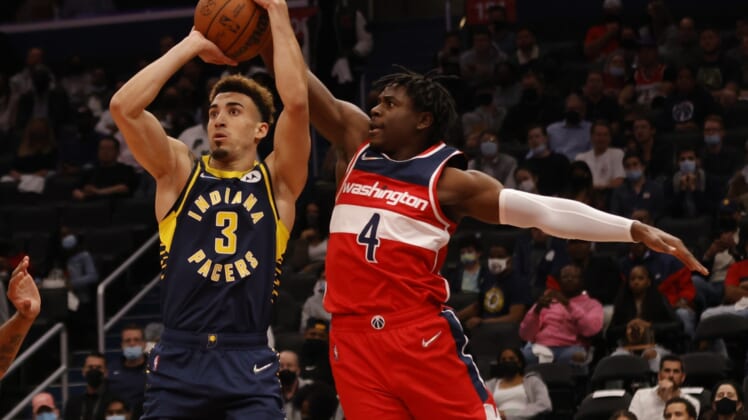 Spencer Dinwiddie scored eight of his team-high 34 points in the final 2:17 of regulation to force overtime, and the host Washington Wizards went on an 11-2 run in the extra frame to power past the Indiana Pacers 135-134 on Friday night.

Washington gave up the first six points in overtime, but whittled away at the deficit to set up what ultimately gave the Wizards the lead for good. Davis Bertans hit a 3-pointer off one of Dinwiddie’s nine assists with 35.2 seconds remaining, breaking a 131-131 tie.

Bertans was one of three Wizards to score in double-figures coming off the bench with 17 points. Raul Neto scored 18 points, and Montrezl Harrell added 14 points and seven rebounds.

Two of Harrell’s points came on a two-handed dunk after a powerful post move. It jump-started Washington, which went almost three minutes into the overtime without a field goal before the basket.

The Wizards bench outscored Indiana’s, 53-18. The reserves helped Washington overcome key performances from the Pacers’ trio of Domantas Sabonis and Malcolm Brogdon, who each scored 28 points; and Myles Turner, who scored a career-high 40 points on 15-of-22 shooting from the floor.

Turner was 5-of-9 from beyond the 3-point arc, and Indiana shot 15-of-34 from long range overall.

It was not quite enough to keep pace with Washington, however, which shot a blistering 19-of-38 on 3-pointers, including 6-of-9 from Dinwiddie and 5-of-8 from Kyle Kuzma, who scored 26 points.

After scoring on a midrange jumper, Dinwiddie followed up with a pair of 3-pointers to force the tie. A Neto steal with 13.9 seconds left gave Dinwiddie a look at the would-be game-winner, but his step-back 3-point attempt at the buzzer was no good.