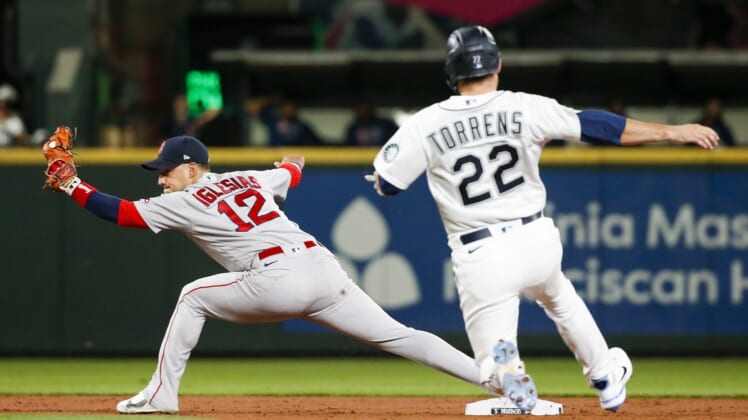 Mitch Haniger clubbed a tiebreaking, three-run home run in the seventh inning to lift the Seattle Mariners over the visiting Boston Red Sox 5-4 on Monday night in the opener of a three-game series.

Haniger’s 33rd homer of the season, against Red Sox reliever Ryan Brasier (0-1), made it 5-2 with two outs. After Brasier coaxed a pair of fly outs to start the inning, Jake Bauers reached on a fielding error by Boston first baseman Kyle Schwarber and advanced to second on J.P. Crawford’s single.

Xander Bogaerts and Rafael Devers hit back-to-back solo homers with two outs in the eighth to pull Boston within a run. Devers’ homer was his team-leading 34th while Bogaerts hit his 21st.

Mariners reliever Diego Castillo (4-5) earned the win after striking out two in a scoreless seventh. Seattle rookie starter Logan Gilbert matched a season high with nine strikeouts over six innings of two-run ball. He yielded five hits and one walk.

Drew Steckenrider tossed a 1-2-3 ninth to record his ninth save.

Seattle (78-66) had lost four of its past six games but improved to 8-4 over its past 12 games. The Mariners moved within two games of the Red Sox and the New York Yankees for the final American League wild-card spot.

Boston (81-65) has dropped six of its past eight. The Red Sox began the day in a statistical tie with Toronto for the top AL wild card but fell one game behind the Blue Jays and into a tie with the Yankees.

Jose Iglesias also had a solo home run and two RBIs for the Red Sox. Boston starter Eduardo Rodriguez allowed two runs (one earned) on six hits with one walk and six strikeouts over six innings.

Groundouts by Ty France in the first and Tom Murphy in the second plated runs to stake the Mariners to a 2-0 lead. Iglesias hit his ninth homer in the third and added a fifth-inning RBI single to tie it.