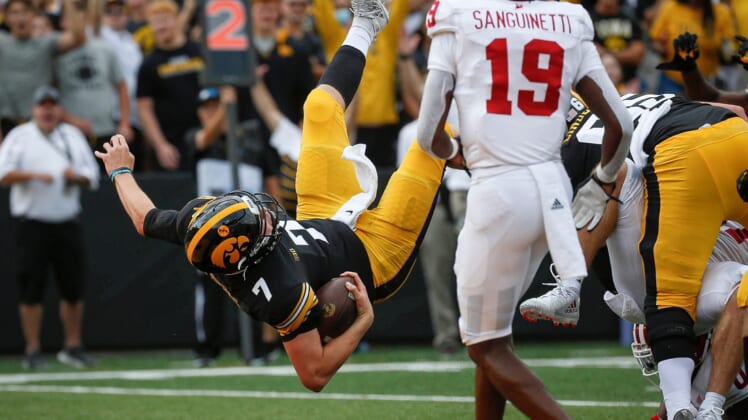 Iowa junior quarterback Spencer Petras dives into the end zone for a Hawkeyes touchdown in the second quarter against Indiana at Kinnick Stadium in Iowa City on Saturday, Sept. 4, 2021.20210904 Iowavsindiana

Cornerback Riley Moss returned two interceptions for touchdowns and Tyler Goodson rushed for 99 yards and one score, lifting No. 18 Iowa to a 34-6 win over No. 17 Indiana on Saturday in Big Ten play at Iowa City.

The Hawkeyes (1-0, 1-0 Big Ten) jumped to a 31-3 halftime and rode their defense and run game the rest of the way. Iowa extended its streak of holding a team under 25 points to 23 straight games.

It was a rough season debut for Indiana quarterback Michael Penix Jr., who was flustered and pressured throughout the game.

Penix, coming off offseason surgery to repair a torn ACL suffered Nov. 28, 2020 against Maryland, completed 14 of 29 passes for 156 yards and threw three interceptions for Indiana (0-1, 0-1) before being replaced early in the fourth quarter.

Goodson gave Iowa a quick 7-0 lead, rushing 56 yards down the left sideline on Iowa’s opening offensive series. Then, on Indiana’s first offensive series, Penix threw behind wide receiver D.J. Matthews.
The ball caromed off Matthews’ hands and into the hands of Moss, who raced 30 yards for a touchdown, putting the Hawkeyes up 14-0.

Two more Penix interceptions led to 10 more Iowa points before the end of the half.

Moss jumped a route on an out pattern from Penix that he returned 55 yards for a touchdown, putting Iowa up 28-3 with 1:41 left in the second quarter.

Then, Iowa safety Dane Belton intercepted a Penix pass at the Iowa 34-yard with 1:12 remaining. That set up Caleb Shudak’s 41-yard field goal, which put the Hawkeyes up 31-3 at halftime.