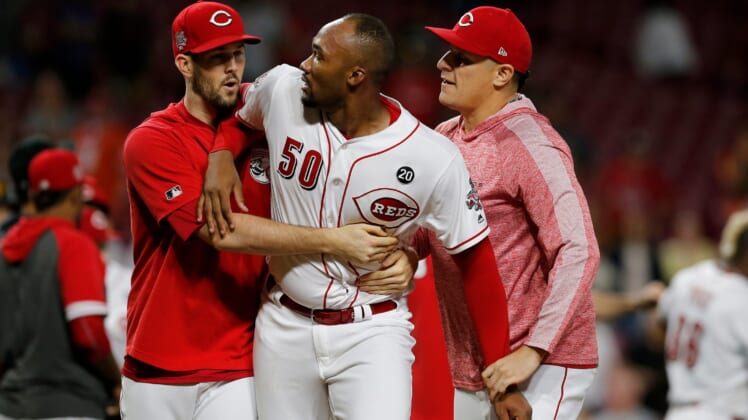 The 2021 MLB season just started and tempers are already high between Chicago Cubs star Javier Baez and the Cincinnati Reds, with a fight nearly erupting on Saturday.

Chicago led 3-2 in the 8th inning on Saturday afternoon when tension started to rise. Baez returned to the dugout after striking out and the Reds brought in relief pitcher Amir Garrett to preserve the one-run deficit. Facing Anthony Rizzo, Garrett got the All-Star first baseman to strike out swinging on an 86 mph slider.

After the 28-year-old southpaw recorded the crucial out, he celebrated the moment. Baez saw the reaction and took issue with it, hopping over the railing as Garrett looked toward the Cubs’ dugout. Both benches immediately emptied as both players headed towards one another before being forcefully separated.

Garrett remained restrained by two teammates as Baez started to calm down. However, Chicago’s star infielder was then spotted flipping off the Reds’ pitcher and was later guided back to the dugout.

Seeing benches empty between these two clubs is nothing new, especially when Baez and Garrett are involved.

In May 2017, Baez hit a grand slam off Garrett that helped seal a sweep for the Cubs. The All-Star shortstop, who is known for playing with enthusiasm and flair, celebrated the home run. Garrett seemed to keep that in mind and brought that same energy in a rematch.

When the two sides met again in 2018, Garrett got his shot at revenge. With Cincinnati leading 4-2 in the seventh inning, he struck out Baez to end the inning. They stared each other down after Garrett celebrated the strikeout then started exchanging words. After Baez invited a fight, the two rivals charged at one another and the benches cleared out.

Needless to say, there is no love lost between these two. Fortunately, a fight didn’t break out and no one was ejected from the game. Given both players have never been shy about showing their emotions, it wouldn’t be a surprise if they go at it once again in a later series.