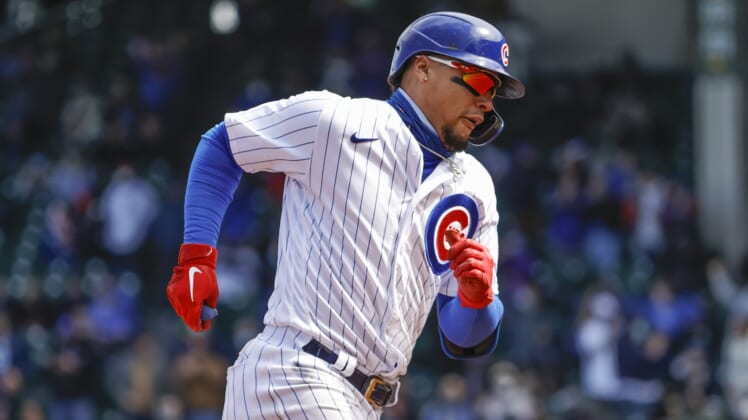 When the Chicago Cubs won the world in 2016, many assumed it was the start of a potential dynasty. Javier Báez was part of the team’s young, exciting core and there was confidence it would be the start of something special in Chicago.

The Cubs reached the postseason in 2020, but they were quickly eliminated. After three consecutive years of not even reaching the NLDS, this team’s window started closing fast. With payrolls tightening across baseball, Chicago’s front office started selling off some of its top talents this winter.

Even after moving off many of its impact players, the Cubs’ iconic core was still together. Kris Bryant, Anthony Rizzo and Baez would all be in the everyday lineup for the 2021 season. But with the team struggling again, the future for all three players in Chicago looks increasingly unlikely.

According to ESPN’s Buster Olney, the Cubs offered Baez a contract extension in the range of $180 million, but specifics weren’t given on the length of the deal. Báez reportedly declined the offer, hopeful to build upon his value.

The number is a bit surprising, given Chicago’s recent determination to shed payroll. The Cubs reportedly lowballed Rizzo, offering him a four-year contract in the range of $60 million. The potential average annual salary would rank below Chris Davis ($21 million), Eric Hosmer ($21 million) and Brandon Belt ($17.2 million).

Rizzo and Bryant are expected to hit the open market this offseason, with a distinct possibility that both depart. Based on how things are going in negotiations, Baez could be headed for the same fate.

Read More: Despite uncertain future, Chicago Cubs must stay the course in 2021

Baez’s MLB career got off to a roaring start. A few years after making his MLB debut, he became a fixture in Chicago’s lineup and played a pivotal role in the club’s World Series title. He earned NLCS MVP in 2017, made the All-World Baseball Classic Team the following year and became a star in 2018.

He made his first All-Star team that season and with growing fan support, made it back to the All-Star Game in 2019. While he took a slight step back offensively that year, his defense improved dramatically.

Unfortunately, Baez is losing the very thing that made him so successful. The 28-year-old’s bat speed was among the best in baseball, allowing him to overcompensate for some bad plate discipline by just always having his timing down at the dish. As he’s gotten older, his bat speed has slipped and he’s experienced alarming regression.

At his peak, per FanGraphs, Baez’s swinging-strike rate hovered around 18%. It was a high number, but he also walked in 5% of his plate appearances and still made contact fairly consistently. Through 15 games this season, Baez has struck out in 45% of his trips to the plate, holds a 1.7% walk rate and an alarming 27% swinging-strike rate.

Báez remains an excellent defender at shortstop, but his deterioration in the batter’s box is a major cause for concern. He’ll also be entering a 2022 MLB free-agent class with Trevor Story, Corey Seager, Carlos Correa, Andrelton Simmons and Marcus Semien. Realistically, he might be the last one to get a lucrative contract out of that group.