Despite uncertain future, Chicago Cubs must stay the course in 2021

The Chicago Cubs have a championship core of players, and even as uncertainty looms after 2021, they're best off playing the year out together on one last ride. 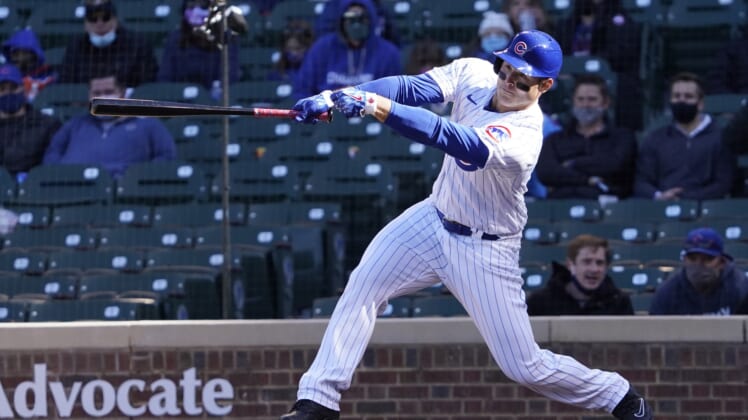 The Chicago Cubs are in a state of flux. Rebuild or go all in? Are they good enough to contend in the National League Central, let alone the NL? These are the questions the Cubs’ brain trust must ponder. The answer lies in forging ahead with what they have in the present.

While they’re coming off being swept in the NL Wild Card Round by the Miami Marlins, the Cubs managed to win the NL Central last season. Of course, there are hallmark faces gone like Kyle Schwarber, Jon Lester, Jose Quintana and Yu Darvish. At the same time, there’s still a competitive roster present, one that doesn’t call for a full-fledged overhaul.

The cloud hanging over the Cubs’ head is the financial situations of many of their star players, including Javier Baez, Kris Bryant and Anthony Rizzo. All three players are free agents after the 2021 MLB season. Meanwhile, catcher Willson Contreras can hit the open market after 2022.

This past offseason, the Cubs traded Darvish and Victor Caratini to the San Diego Padres in a move that was presumably made to open up future payroll flexibility (Darvish is due roughly $59 million through 2023, per Spotrac). The premier player they received from San Diego was veteran starter Zach Davies, who is a free agent after this year.

The Cubs should be able to keep one of their three free agents to-be and can probably eke out a way to keep another. Expecting all three to be retained is unrealistic. That said, keeping two out of three is realistic. Players like Baez, Bryant and Rizzo don’t just grow on trees.

Having two of those players intact gives the Cubs a nucleus to work with around the diamond. One has to consider the value they’d receive for these players if they decided to sell before this season’s MLB trade deadline.

What would the trade market be for Baez, Bryant and Rizzo if the Cubs make them available in two months? A team would be surrendering capital for three to four months of a high-caliber player, without any assurance that they’d re-sign with them in the offseason.

There’s no king’s ransom coming for these stars. The time to trade them for value would’ve been a year and a half ago. The Cubs’ best bet is getting a lower-end top-10 prospect and/or getting other teams in a bidding war. But again: Which team wants to get in such a situation for a player they can bid for with mere money in free agency?

No return the Cubs will receive for these players is significantly moving the needle. The haul won’t considerably enhance a rebuilding effort, nor will it improve the team in the short term.

There’s also the idea of going out the right way. The core of this roster, many of which are those hitting the open market in the near future, won a World Series together. They’ve grown up together. Do the Cubs really want to unceremoniously deal away their positional staples for minimal value as a means of severing ties?

Chicago Cubs can contend in the NL Central

Yes, the NL Central is stiff. The St. Louis Cardinals now have Nolan Arenado, the Milwaukee Brewers are typically a well-oiled machine, and the Cincinnati Reds have proven talent across the board. At face value, this hurts the Cubs’ chances of returning to the playoffs. Plus, they’re out to a yawning 5-8 start, which includes two series losses to the Brewers and splitting a pair of series with the Pittsburgh Pirates.

All that said, the Cubs are more than capable of putting up a fight over the course of a 162-game season.

Manager David Ross’ positional depth chart includes Baez, Bryant, Rizzo, Contreras, Ian Happ, Jason Heyward and Joc Pederson. On the mound, the Cubs have the savvy Kyle Hendricks, Zach Davies and Jake Arrieta back with something to prove. Maybe the 26-year-old Adbert Alzolay can take the next step after showcasing some promise in 2020. He posted a 2.95 ERA and 29 strikeouts across six appearances, four of which were starts, last season.

At times, the questions and stagnation that exists on a club like the Cubs can be resolved by simply playing the games out. Maybe there’s a surprise development or two on the pitching staff, helping form a sturdy rotation? Perhaps Chicago’s offense performs up to its billing? Bottom line: Play out the season, and see what happens.

The Chicago Cubs don’t have a perfect roster, nor are they the team to beat in their division. Nevertheless, their best course of action is to chug forward with what they have and let the chips fall where they may in the offseason.