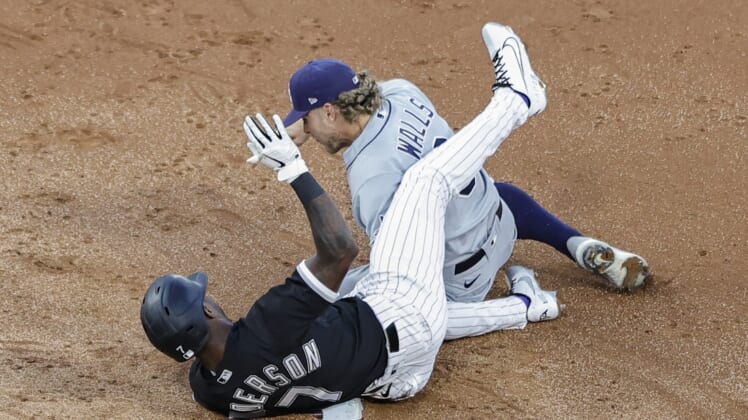 Austin Meadows, Brandon Lowe and Randy Arozarena homered and four pitchers combined on five innings of two-hit relief to boost the visiting Tampa Bay Rays to a 5-2 victory against the Chicago White Sox on Monday night in a meeting of first-place clubs.

Tyler Glasnow pitched four innings of two-run ball before giving way to the Rays’ relief corps, which entered the series with an American League-best 3.05 ERA.

Tampa Bay’s bullpen relay took it from there, paced by J.P. Feyereisen, who contributed two innings of scoreless relief with a pair of strikeouts to earn the victory, improving to 3-0.

Pete Fairbanks pitched a 1-2-3 ninth to earn his third save as the Rays won for the seventh time in eight games.

Despite turning in a quality start, White Sox right-hander Lance Lynn took the loss, spacing three runs and six hits in six innings. Lynn (7-2) walked three and struck out eight as his ERA rose to 1.51.

Tim Anderson had two of Chicago’s five hits. The White Sox went 1-for-4 with runners in scoring position while stranding five men on base.

Tampa Bay jumped out to a 2-0 lead four batters into the game, as Meadows smacked his 15th home run of the season to score Arozarena, who reached on a one-out double, one of his two hits.

The Rays added to their advantage in the third on Lowe’s solo shot to right field.

Chicago responded with a pair of runs in the bottom of the inning. The White Sox got on the board when Leury Garcia scored from third on a Glasnow wild pitch with Anderson at bat. Following an Anderson double, Brian Goodwin delivered an RBI single to left to bring Chicago to within 3-2.

Arozarena hit a solo homer in the eighth before the Rays added an insurance run in the ninth, as a Brett Phillips single scored Taylor Walls on a play that included an error from White Sox reliever Jose Ruiz.

Joey Wendle also had two hits for the Rays.