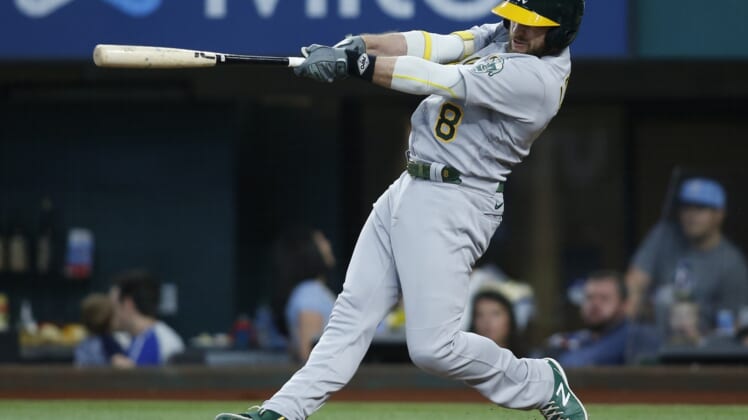 Jed Lowrie hit one of Oakland’s four homers and delivered a tie-breaking single during a four-run 11th inning as the Athletics outlasted the Texas Rangers 8-4 on Saturday in Arlington, Texas.

Lowrie, who also doubled, broke a 4-4 tie with his run-scoring hit to right field in the 11th. After Matt Olson scored on a wild pitch by Spencer Patton (0-1), Lowrie came home on Stephen Piscotty’s two-run homer that helped the A’s even this final three-game set before the All-Star break.

Sean Murphy and Seth Brown (2-for-3) clubbed back-to-back solo homers in the second for Oakland, which took a 3-2 lead into the bottom of the eighth. However, Jake Diekman walked two of the first three batters he faced, then yielded a game-tying single to Texas’ Jonah Heim (2-for-5).

The A’s took a 4-3 lead in the 10th on Ramon Laureano’s run-scoring single but Heim again knotted the game for Texas on a run-scoring infield single.

Adolis Garcia and Joey Gallo hit back-to-back homers in the first for the Rangers, who are 5-4 versus Oakland this season.

After talented Oakland rookie James Kaprielian retired Texas’ first two batters of the game, the Rangers’ two All-Stars for 2021 put the hosts ahead 2-0. Garcia cracked a first-pitch, opposite-field drive for his 22nd home run — most of any rookie in the majors — and Gallo followed with a blast into the right-field seats for his 24th of the season.

However, the A’s went back-to-back off Texas’ Mike Foltynewicz with two outs in the second. Murphy drove a shot into the second deck of the left-field seats and Brown followed with a no-doubt drive to left-center field for his 10th home run.

Again with two outs, Lowrie broke the tie with a ball that just cleared the right-field wall against Foltynewicz in the fourth to give Oakland a 3-2 lead.

Kaprielian settled down after the two-run first to throw four scoreless innings despite issuing four total walks. He yielded four hits and struck out four over his five innings of work. J.B Wendelken (2-1) pitched two innings for the win despite blowing a save in the 10th.

In addition to the three homers, Foltynewicz allowed two more hits and fanned six without a walk over 6 1/3 innings.