WATCH: No. 7 Cincinnati passes first big test with win at No. 9 Notre Dame 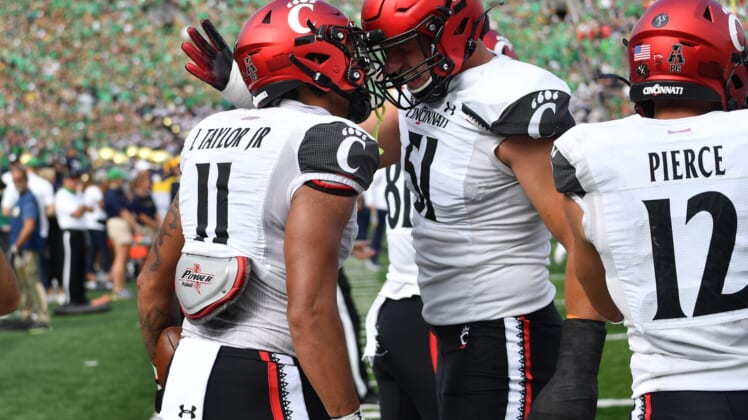 In improving to 4-0, the Bearcats set themselves up for a legitimate chance at an undefeated season that might make them the first Group of Five school to crash the College Football Playoff.

Ridder completed 19 of 32 passes for 297 yards and made just one mistake, losing a fumble in the third quarter that the Fighting Irish (4-1) converted into their first touchdown. They drew within 17-13 with 8:20 remaining when backup quarterback Drew Pyne hit Braden Lenzy for a 32-yard scoring pass.

But Ridder had the answers when Cincinnati needed them. He led the team on a 75-yard touchdown drive, covering the last 6 yards on a run around left end with 5:08 left in the game.

While Ridder led the Bearcats expertly, Notre Dame used three quarterbacks that all struggled with an aggressive, hard-hitting defense. Starter Jack Coan played most of the first half and hit 14 of 22 passes for 114 yards and two interceptions.

Pyne played the second half, completing 9 of 22 passes for 143 yards.

After a scoreless first quarter in which Notre Dame controlled the ball for nearly 11 minutes and outgained Cincinnati 92-38, the Bearcats used two Irish turnovers to take command.

Coan forced a pass over the middle under pressure that Deshawn Pace intercepted and returned 27 yards to the 8. Three plays later, Ridder play-faked and lofted a 1-yard touchdown pass to Leonard Taylor with 12:09 left in the first half.

Chris Tyree then muffed the ensuing kickoff and Wilson Huber recovered at the 17. Ridder’s touchdown pass to Jerome Ford was nullified for an ineligible man downfield, forcing Cincinnati to settle for Cole Smith’s 23-yard field goal.

The Bearcats made it 17-0 with 40 seconds left in the half when Ridder and Tre Tucker hooked up for a 27-yard scoring strike, capping an 80-yard drive that lasted just over a minute.