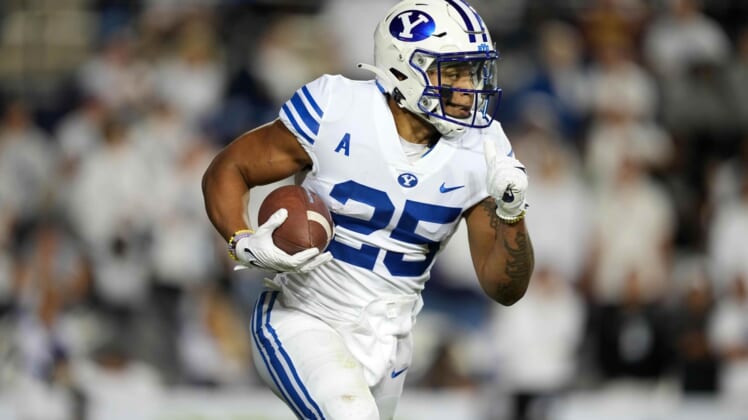 Hall managed to walk off the field but did not return following a 13-yard run that took BYU to the Arizona State 4 with 2:17 left.

Backup quarterback Baylor Romney almost dropped the ball and fell on the snap on third-and-goal at the 3, but he completed the game-securing touchdown pass to Isaac Rex with 1:19 left.

The Sun Devils, playing their first road game with fans in the stands in two seasons, were beset by 16 penalties for 121 yards.

Arizona State (2-1) looked like it could rally to take the lead with 6 seconds left in the third quarter when Merlin Robertson intercepted a pass by Hall, but he was caught from behind by Tyler Allgeier during a 60-yard return.

Allgeier punched the ball loose and Hall recovered at the BYU 15, preserving the Cougars’ 21-17 lead.

BYU improved to 3-0, all against Pac-12 opponents — Arizona, Utah and Arizona State.

BYU scored 37 seconds into the game after the Cougars’ Hayden Livingston recovered a fumble by Geordon Porter on the opening kickoff at the Arizona State 12.

Arizona State responded on the following possession with a touchdown as Jayden Daniels completed all three of his pass attempts for 78 yards in the drive, including a 58-yard completion to Andre Johnson to the Cougars’ 1-yard line.

Rachaad White ran for a score on the next play with 11:10 left in the first quarter.

Daniels completed 21 of 29 pass attempts for 265 yards, with two interceptions and no touchdowns.

Hall completed touchdown passes on BYU’s next two possessions to give the Cougars a 21-7 lead.

Arizona State, which had 24 yards rushing in the first half, opened the second half with eight of the nine plays on the ground, capped by Daniyel Ngata’s 10-yard run with 9:42 left in the third quarter that cut the lead to 21-14.

The Sun Devils cut the lead to 21-17 on their next possession on a 40-yard field goal by Cristian Zendejas with 3:40 left in the third quarter.