WATCH: No. 10 Penn State Nittany Lions hold on to defeat No. 22 Auburn Tigers 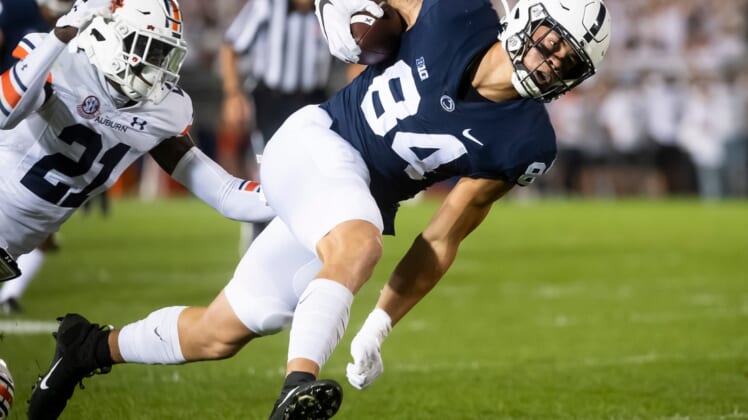 The Nittany Lions (3-0) led throughout the second half, but the Tigers (2-1) drove to the Penn State 2 in the waning minutes. On fourth down, Bo Nix’s pass fell incomplete to Kobe Hudson, who got tangled up with Penn State safety Jaquan Brisker, but no flags were thrown.

After a punt, Auburn got the ball back on its own 38 with 45 seconds left. The Tigers got as far as the Nittany Lions’ 26, but Nix’s last-second pass down the seam was broken up by Brisker.

Clifford finished 28 of 32 for 280 yards, while Jahan Dotson hauled in 10 receptions for 78 yards and a score. Noah Cain and Tyler Warren rushed for touchdowns for the Nittany Lions.

Nix was 21 of 37 for 185 yards without a touchdown or an interception. Tank Bigsby carried 23 times for the visitors, accumulating 102 yards and two scores.

Penn State held a 14-10 lead at halftime and extended its cushion early in the third. Auburn fumbled on the first play of the quarter and, four plays later, Warren jumped into the end zone for a 2-yard TD.

The Tigers scored on their ensuing possession as Bigsby’s 6-yard plunge capped a 15-play, 75-yard march. A 43-yard field goal by Anders Carlson on the first play of the fourth quarter brought Auburn within 21-20.

Clifford’s 40-yard pass to Brenton Strange was the big play on Penn State’s next drive, which Cain punctuated with a 3-yard TD run with 10:48 to go for the 28-20 lead.

Following a touchdown pass from Clifford to Dotson late in the first quarter, Auburn came right back with a TD of its own — a 4-yard plunge by Bigsby to put the Tigers ahead 10-7 with 12:28 left in the half.

Penn State regained the lead with 1 1/2 minutes to play before intermission. The go-ahead drive encapsulated 14 plays and 91 yards with Clifford finding a wide-open Strange for a 2-yard TD.