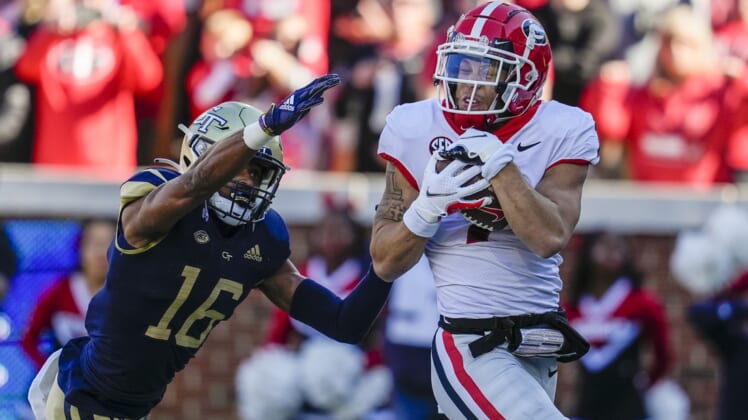 Stetson Bennett threw for 255 yards and four touchdowns Saturday as top-ranked Georgia capped its first 12-0 regular season in school history with a 45-0 victory over host Georgia Tech in a nonconference game in Atlanta.

Bennett, who was replaced by JT Daniels early in the fourth quarter, went 14-for-20 passing and completed passes to 10 different receivers.

Brock Bowers led the way with 100 yards and two touchdowns on three catches, while Ladd McConkey and Jermaine Burton each caught a touchdown pass. Kenny McIntosh rushed for 66 yards and a touchdown on two carries to power a ground game that amassed 208 yards on 31 carries, an average of 6.7 yards an attempt.

Georgia outgained Georgia Tech 463-171 and the Yellow Jackets never penetrated the Bulldogs’ 25-yard line in what was the largest shutout in the rivalry’s 113-game history.

The Bulldogs will face No. 3 Alabama in the Southeastern Conference title game on Dec. 4 in Atlanta.

Leading 24-0 at halftime, Georgia didn’t let up in the second half against the Yellow Jackets (3-9), who have lost six straight games for the first time since 1994.

The Bulldogs opened the third quarter with Bennett throwing a five-yard pass to receiver George Pickens, who was playing in his first game since tearing his ACL in practice last March. Bennett capped the nine-play, 97-yard drive with a five-yard touchdown pass to Bowers for a 31-0 lead with 9:55 left in the quarter.

After Georgia took an early 3-0 lead on Jack Podlesny’s 38-yard field goal, the Bulldogs extended the lead to 10-0 when Bennett lofted a 25-yard pass over the defense to Burton to cap an eight-play, 80-yard drive with 4:38 left in the first quarter.

McConkey pushed the lead to 17-0 when he turned a screen pass into an 11-yard touchdown to cap a seven-play, 87-yard drive just 87 seconds into the second quarter.

After Georgia Tech went three-and-out, Georgia needed just two plays to find the end zone again. Bennett hit Bowers for a quick nine-yard pass that the freshman caught in stride and outraced the defense for a 77-yard scoring play for a 24-0 lead with 11:03 left in the first half.