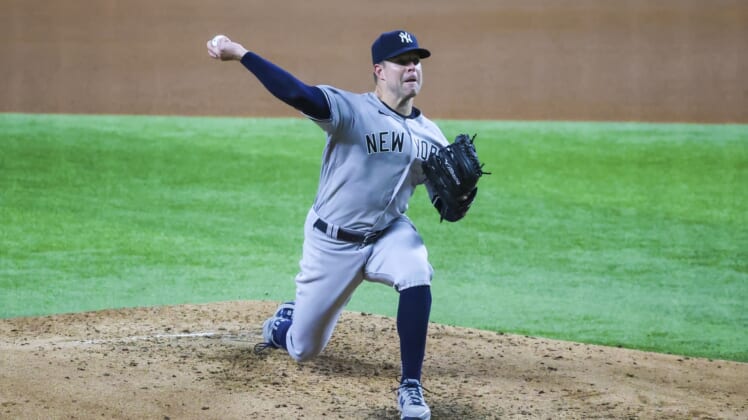 Another day, another no-hitter.

It was the second no-no in two days after the Detroit Tigers’ Spencer Turnbull accomplished the feat Tuesday against the Seattle Mariners.

Kluber (4-2) walked one and struck out nine, facing one batter over the minimum. Charlie Culberson was the lone Texas baserunner, as he drew a one-out walk in the third inning. Kluber retired the final 20 batters he faced.

Willie Calhoun grounded out to second base for the final out. Kluber threw 71 of his 101 pitches for strikes.

The no-hitter was the first for the Yankees since David Cone’s perfect game against the Montreal Expos on July 18, 1999. Kluber authored the 12th no-hitter in franchise history.

The Yankees backed Kluber with two runs in the sixth inning. Kyle Higashioka walked to open the inning, and he scored on Tyler Wade’s triple. DJ LeMahieu’s sacrifice fly knocked in Wade. 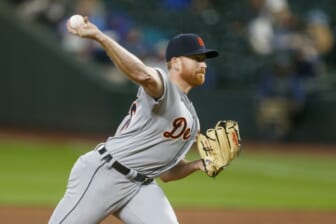 Kluber, 35, was making his ninth start as a Yankee after joining the team as a free agent on a one-year, $11 million deal in January.

The American League Cy Young Award winner for the Cleveland Indians in 2014 and 2017, Kluber was with the Rangers last year. He made just one appearance, lasting one inning, before a shoulder ailment sent him to the injured list for the remainder of the season.

Kluber joins the 2021 no-hitter list that includes the San Diego Padres’ Joe Musgrove (April 9 against the Rangers), the Chicago White Sox’s Carlos Rodon (April 14 against the Cleveland Indians), the Baltimore Orioles’ John Means (May 5 against the Mariners) the Cincinnati Reds’ Wade Miley (May 7 against the Indians) and Turnbull.

The Rangers joined the Indians and Mariners in having been no-hit twice this season.

The Arizona Diamondbacks’ Madison Bumgarner threw a seven-inning no-hitter against the Atlanta Braves in the second game of an April 25 doubleheader, but Major League Baseball doesn’t count that game as an official no-hitter.