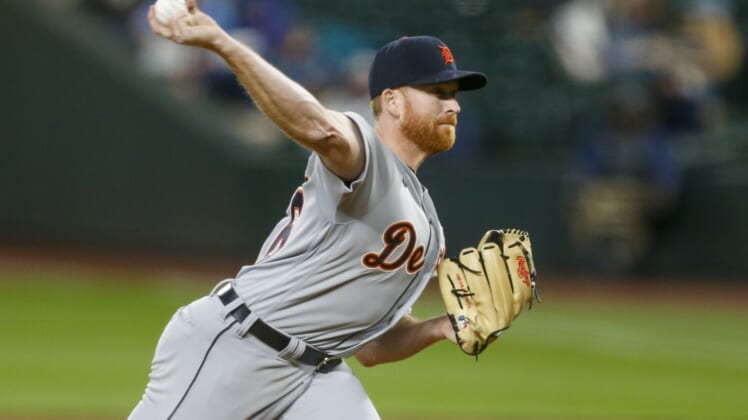 Turnbull (3-2) walked two and struck out nine. The complete game was the first in his 50 career major league starts.

The Mariners were no-hit for the second time this month, as the Baltimore Orioles’ John Means accomplished the feat on May 5 in Seattle.

Turnbull, 28, retired the first nine batters he faced before Jarred Kelenic walked to lead off the fourth inning. Kelenic stole second with two outs but was stranded when Kyle Lewis struck out.

He then set down 15 in a row before Jose Marmolejos walked leading off the ninth inning.

Sam Haggerty then struck out swinging, Kelenic grounded into a force play at second base, and Mitch Haniger swung through Turnbull’s 117th pitch to start the celebration.

The Tigers got all the offense they needed on Jeimer Candelario’s solo homer in the first inning off Justin Dunn (1-2). Candelario added an RBI groundout in the third inning, and Miguel Cabrera singled home a run in the eighth. Akil Baddoo and Jonathan Schoop contributed RBI singles in the ninth.

The other no-hitters this year were thrown by the San Diego Padres’ Joe Musgrove on April 9 against the Texas Rangers, the Chicago White Sox’s Carlos Rodon against the Cleveland Indians on April 14 and the Cincinnati Reds’ Wade Miley on May 7 against the Indians.

The official list doesn’t include a seven-inning no-hitter by the Arizona Diamondbacks’ Madison Bumgarner against the Atlanta Braves in the second game of an April 25 doubleheader.

Dunn allowed two runs on five hits and two walks in 5 2/3 innings. He struck out nine.

The no-hitter was the first by a Tigers pitcher since Justin Verlander threw his second for Detroit on May 7, 2011, against the Toronto Blue Jays.