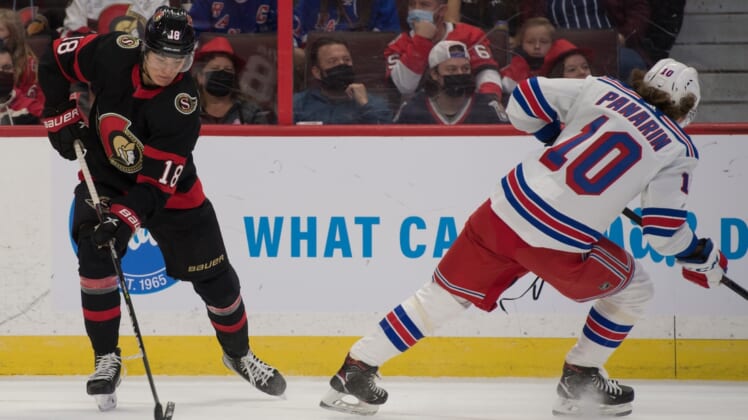 Barclay Goodrow scored the tiebreaking goal with 2:03 remaining in the third period and the New York Rangers pulled off an unlikely comeback in the final-five plus minutes to end an unbeaten road trip with a 3-2 victory over the host Ottawa Senators on Saturday afternoon.

The Rangers won their fourth straight to cap a four-game trip that featured close wins in Montreal, Toronto and Nashville. They also improved to 4-0-1 in their past five games since a season-opening 5-1 loss in Washington on Oct. 12.

Goodrow scored his second goal as a Ranger when he went to the net and deflected a seemingly harmless wrist shot from in front of the blue line by Sammy Blais. The go-ahead goal occurred shortly after the Rangers forced Ottawa into a turnover near the boards deep in the defensive zone.

Before Goodrow gave New York its first lead, Chris Kreider began the comeback on the power play with 5:23 remaining by tipping in a pass from Artemi Panarin over goaltender Matt Murray, who was injured on the play and departed.

After Kreider scored, defenseman Ryan Lindgren tied the game with a tip-in with 4:08 remaining during a 4-on-4.

Alexandar Georgiev made 26 saves and survived allowing goals early in the first and third periods in his second start of the season.

Nick Paul and Josh Norris scored for Ottawa, which dropped its second straight. The Senators also lost Murray to an apparent leg injury after Kreider scored.

Paul opened the scoring 41 seconds into the game on Ottawa’s first shot when he finished off a 3-on-2 by lifting a low wrist shot from the slot over Georgiev.

Norris made it 2-0 by forcing a turnover from Panarin just inside the Ottawa blue line. He shot the puck from above the right circle under the legs of New York defenseman Patrik Nemeth and his goal trickled under Georgiev.