Morgan Rielly scored at 19:48 of the third period to lift the visiting Toronto Maple Leafs over the Buffalo Sabres 5-4 on Saturday night.

After Buffalo scored twice in the third period to tie the game, Rielly, who also had an assist, scored his first goal of the season.

The shot from the high slot hit the crossbar before going in and made goaltender Joseph Woll, who made 23 saves, a winner in his NHL debut.

John Tavares had a goal and an assist for the Maple Leafs, who have won eight of their past nine. David Kampf, Ondrej Kase and Michael Bunting also scored for Toronto.

Jeff Skinner had two goals and an assist for the Sabres, who have lost six of their past seven. Tage Thompson had a goal and an assist and Rasmus Dahlin had a goal. Kyle Okposo added two assists.

Aaron Dell made 21 saves for Buffalo.

Kampf scored his second goal of the season at 2:43 of the first period. He worked the puck from the corner toward the slot and slid a shot that went under sprawling defenseman Robert Hagg and through the five-hole on Dell.

Skinner scored at 14:42. He snapped home a shot from the left circle on a rebound off the end boards from Colin Miller’s wide shot. 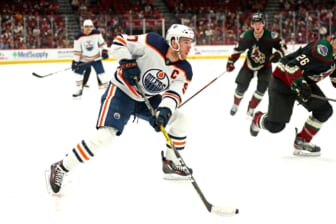 Kase scored his fourth goal of the season at 7:18 of the second period. After whiffing on his first attempt from the right circle, he recovered to find the mark over Dell’s shoulder.

Toronto added to the lead 70 seconds later when Bunting scored his fourth goal, pouncing on the loose puck after Jake Muzzin’s shot was blocked at the defense.

Thomas scored for the fifth time this season when he ripped a slap shot from the top of the right circle at 17:33.

Tavares deflected Rielly’s shot from the point on a power play at 9:22 of the third for his eighth goal of the season.

Buffalo scored 59 seconds apart. Skinner scored his fifth goal of the season, and Dahlin tied the game with his second of the season.