Mike Muscala scored 20 points, including a pair of clinching free throws with 3.6 seconds to play, as the Oklahoma City Thunder outlasted the visiting San Antonio Spurs 99-94 Sunday to win their second consecutive game.

The Thunder erased a 17-point deficit and took a 79-69 lead into the final quarter. After the lead changed hands twice, Oklahoma City took a 97-94 advantage with 46.9 seconds to play.

The Spurs’ Lonnie Walker IV missed a wild 3-point attempt when up against the shot clock with 7.5 seconds left, and Muscala hit his two free throws to cap the Thunder’s win, their third of the season.

Shai Gilgeous-Alexander added 14 points and nine assists for the Thunder, with Jeremiah Robinson-Earl and Luguentz Dort scoring 13 points each, and Darius Bazley getting 11 points and 11 rebounds.

Keldon Johnson led the Spurs with 22 points and Walker IV had 15 off the bench. Drew Eubanks had 14 points and 11 rebounds, and Dejounte Murray, Doug McDermott and Thaddeus Young added 10 points apiece.

The Spurs raced to a 14-4 lead by the halfway mark of the first quarter and, after a brief Oklahoma City run, pushed their advantage to 28-14 after 12 minutes of play. The Thunder shot just 23.1 percent from the floor in the period.

Oklahoma City trailed by as many as 16 points in the second quarter before scoring seven of the final nine points of the period and pulling to 55-45 at halftime. 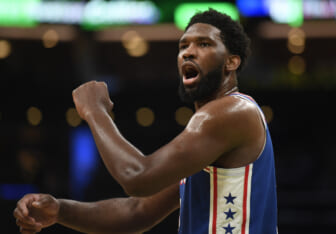 Muscala led all scorers with 14 points off the bench in the first half, with Gilgeous-Alexander tallying just five points.

Johnson paced the Spurs with 12 points at halftime while Walker IV added 11.