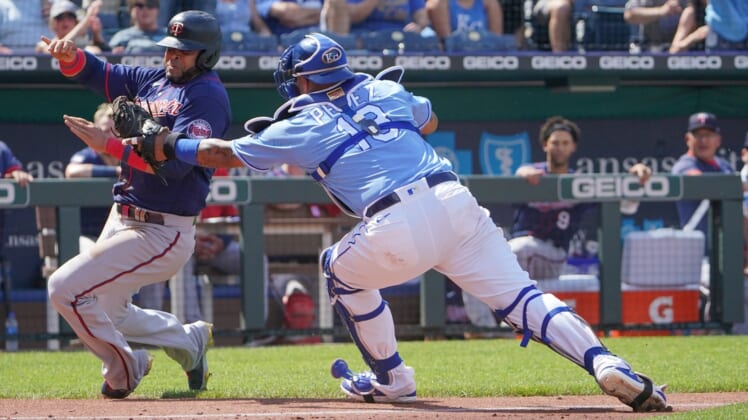 Miguel Sano belted a two-run homer in the sixth inning to fuel the visiting Minnesota Twins’ 5-4 victory over the Kansas City Royals on Saturday.

Sano came into the game with one hit in his last 25 at-bats, a home run on Friday night. He made outs his first two at-bats Saturday before connecting off Mike Minor (4-3).

The Royals had Jarrod Dyson on third base with one out in the ninth inning, but Michael A. Taylor lined into a double play. The loss snapped Kansas City’s five-game winning streak.

Jose Berrios (6-2) picked up the win despite surrendering four runs on six hits in six innings, walking two and striking out four.

Two relievers bridged the gap to Hansel Robles, who worked the ninth to pick up his fifth save in seven chances. Robles had given up a run in each of his last four appearances. The Twins’ bullpen recorded three scoreless innings on Saturday.

Minor struggled as well, allowing five runs on seven hits in seven innings. He surrendered five runs to account for all of the Twins’ runs.

The Twins scored first in the second inning on a two-run home run by Ryan Jeffers.

The Royals answered with two in the bottom of the inning on a two-out, two-run single by Whit Merrifield. A pair of singles and a walk to Nicky Lopez loaded the bases before Merrifield came through.

The Twins came right back in the third inning with a lead-off home run by Kyle Garlick. Nelson Cruz singled with two outs and stole his first base since 2018. Alex Kirilloff singled up the middle, but Cruz was thrown out at the plate by Taylor.

Lopez led off the fifth inning with a double and came around to score on Andrew Benintendi’s two-out home run, giving the Royals a 4-3 lead.