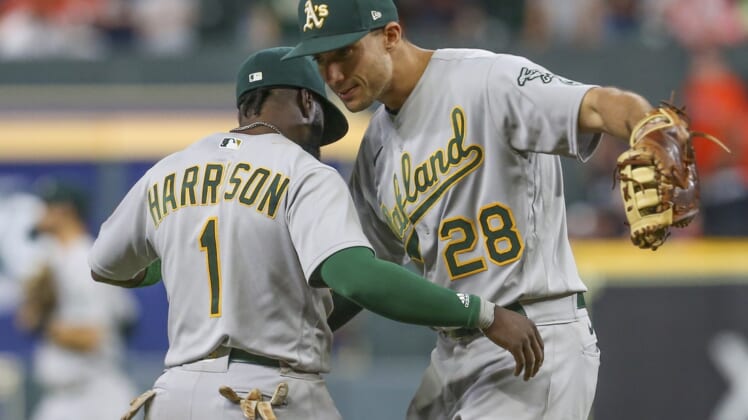 Olson drilled a two-run homer an estimated 418 feet to right-center field that pushed Oakland to a 4-1 lead in the sixth inning and chased Astros starter Framber Valdez.

Oakland’s fifth pitcher on the night, Lou Trivino, snuffed the rally by retiring Alex Bregman, who represented the tying run, on a groundout to end the inning.

The Astros applied additional pressure in the ninth, but Trivino retired Jake Meyers with the tying run in scoring position to record his 22nd save.

Valdez (11-6) was undone by the Athletics’ collective speed and one mistake pitch to Oakland right fielder Chad Pinder leading off the fourth.

Tony Kemp and Starling Marte recorded stolen bases in the third inning. Kemp led off with a walk, swiped second, and scored on an opposite-field single by Josh Harrison to right that pulled the Athletics even at 1-1.

Pinder led off the fourth by drilling an 0-2 sinker from Valdez into the right-field seats for a 2-1 lead. In the sixth, Marte led off with a single and again appeared set to cause havoc. Just as Marte bluffed an attempt to pursue second base, Valdez served up a 1-1 sinker, and Olson crushed it.

Marte later added his second steal of the night, and his best-in the-majors 47th.

Valdez allowed four runs on four hits and one walk with seven strikeouts over five-plus innings.

Manaea (11-10) enjoyed a more resourceful outing against an Astros lineup initially without five regulars one night after Houston clinched the AL West for a fourth time in five seasons. Manaea did allow a leadoff triple to Jose Siri in the first, with Siri later scoring on a single by Aledmys Diaz.

Manaea kept Houston in check until departing after Meyers doubled home Chas McCormick with two outs in the sixth. He allowed two runs on seven hits and one walk with six strikeouts.