May 24, 2021; Montreal, Quebec, CAN; Toronto Maple Leafs center William Nylander (88) and Montreal Canadiens defenseman Ben Chiarot (8) battle for the puck during the first period of the game three of the first round of the 2021 Stanley Cup Playoffs at Bell Centre. Mandatory Credit: Jean-Yves Ahern-USA TODAY Sports

William Nylander also scored for the Maple Leafs, who had 28 saves from goaltender Jack Campbell.

Nick Suzuki scored for the Canadiens, with Carey Price stopping 27 shots. Game 4 in the best-of-seven series is Tuesday night, also in Montreal.

The Maple Leafs killed off a double-minor, high-sticking penalty to Alex Galchenyuk that was assessed one minute into the game.

The closest Montreal came to scoring during the power play came when rookie Cole Caufield, inserted into the lineup for his scoring touch, hit the crossbar with a shot at 2:19 of the first period.

During Toronto’s first power play, Price reached across the goal with his stick to stop Jason Spezza’s shot at 10:26 of the first period.

Campbell made his best save of the first period on a shot by Brendan Gallagher, who was left alone in the low slot. 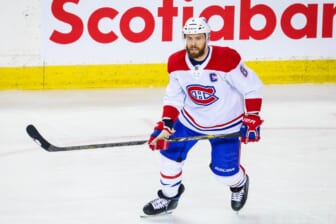 Toronto took the lead at 7:18 of the second period on Nylander’s third goal of the series. Alexander Kerfoot won the faceoff in the Montreal zone to set up Nylander’s shot from the high slot.

Suzuki tied the game at 13:56 of the second on a shot from the right circle. Tomas Tatar won the puck along the barrier in the neutral zone before Corey Perry passed to Suzuki, who was skating down the right wing.

Rielly restored Toronto’s lead at 16:35 of the second on a shot from the right circle. The defenseman converted a pass from Mitchell Marner. TJ Brodie also earned an assist.

The Canadiens exerted constant pressure in the third period. They had 12 shots on goal to one by Toronto in the first 15 minutes of the third. Price was removed for an extra attacker with two minutes left.

Montreal’s Artturi Lehkonen (undisclosed) left during the first period and did not return.

Toronto’s Nick Foligno (lower body), who had replaced John Tavares (concussion) as second-line center, did not play on Monday.