WATCH: Thanh Le turns the ‘Lights Out’ in ONE Championship main event 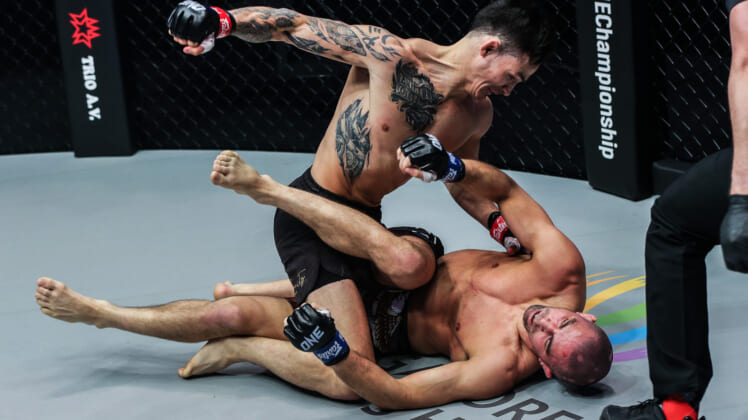 In the main event of ONE Championship’s “Lights Out” event on March 11, featherweight champion Thanh Le dealt out a knockout finish that perfectly mirrored the card’s nickname.

“Lights Out” was an event that completely delivered on the name it was given. Of the 11 bouts on the card, all but two ended in a KO finish. That included the event’s highly anticipated title fights in the co-main event and headliner.

However, when you close the show with a destructive fashion, that will often be the lasting memory for the MMA fans that tuned into the event inside the Singapore Indoor stadium.

In his first title defense after winning the featherweight belt from Martin Nguyen in October, Le (13-2) faced submission ace Garry Tonon on Friday. The matchup pit the two fastest-rising talents in the division in a classic MMA battle of outstanding grappler versus dangerous striker.

Unfortunately for the New Jersey native Tonon (6-1), Le only needed 56 seconds to prove his dominance as champion. After “The Lion Killer” attempted to secure a kneebar in the first minute of the bout, Le defended expertly and was able to stay safe while also being in a position to unload with heavy strikes from above.

While in one defensive transition, the Louisiana native unleashed a thunderous right hand that put Tonon to sleep almost instantly. The follow-up shots only put an exclamation point on the fact that the 30-year-old was done for the night and the division king had his twelfth knockout in 13 career wins. The KO also netted Le a $50,000 performance bonus check.

In the evening’s featured bantamweight matchup, UFC veteran John Lineker also added to the card’s knockout party when he dethroned the greatest bantamweight competitor in ONE Championship history, Bibiano Fernandes.

After a back-and-forth first round where the gifted grappler in Fernandes actually knocked down his heavy-hitting fellow Brazilian, the second round was a showcase of Linker’s power punching skills. He ripped away at the champion’s body with hard body shots before landing a thunderous left hook that floored the 41-year-old.