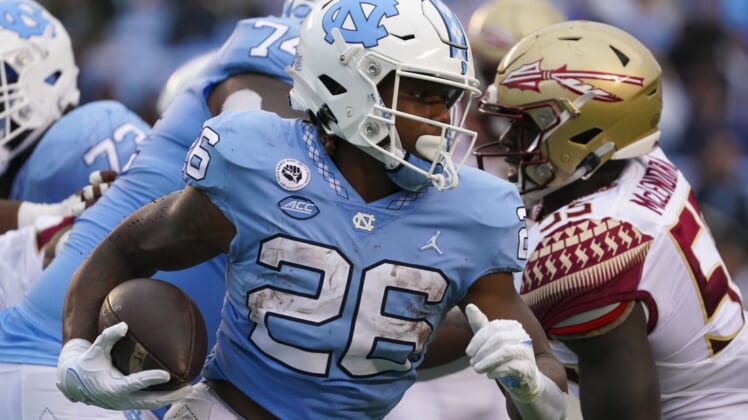 Quarterback Jordan Travis had a hand in all five of Florida State’s touchdowns, leading the Seminoles to a 35-25 win over North Carolina on Saturday in Chapel Hill, N.C.

North Carolina lost its first game at home this season.

With his team down 10-0 in the second quarter, Travis threw his first touchdown pass to Malik McClain for five yards.

On Florida State’s next possession, Travis used play action to get some space, paused for a moment, then took off over left tackle and scored on a 53-yard run.

After the Seminoles got the ball back via interception, Travis found Ontaria Wilson for the first of two touchdown connections, a 32-yard touchdown for a 21-10 lead with 53 seconds left in the half.

The Tar Heels made it a four-point game in the third quarter after a defensive stand and a six-play, 70-yard drive that ended in quarterback Sam Howell’s 21-yard TD pass to Kamari Morales.

But Florida State, in winning its second straight game, scored two unanswered touchdowns and put the game away.

A 44-yard completion from Travis to Keyshawn Helton, plus a 15-yard roughing-the-passer penalty against North Carolina, set up a one-yard scoring run for Travis. Then the Seminoles drove 83 yards, with Travis finding Wilson for a six-yard touchdown with 1:02 left in the third quarter.

Howell had 11 carries for 108 yards and Josh Downs caught nine passes for 121 yards, including a touchdown.

The Tar Heels put together a lengthy drive in the fourth quarter, but it consumed far too much game clock despite Ty Chandler’s two-yard touchdown run and the trick-play two-point conversion with 2:47 left in the game.