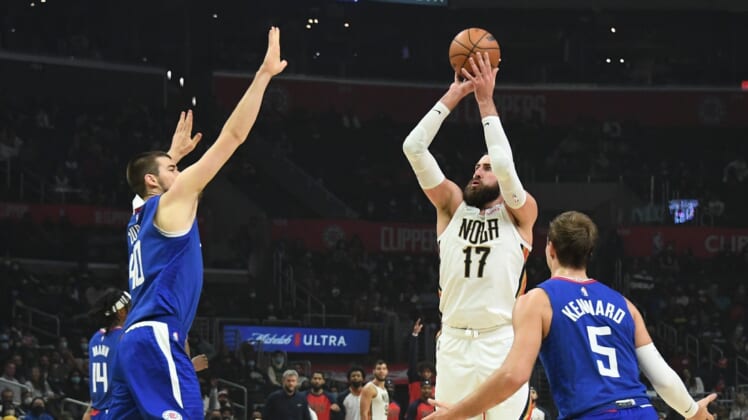 Jonas Valanciunas scored a career-high 39 points and grabbed 15 rebounds to lead the visiting New Orleans Pelicans to a 123-104 win over the Los Angeles Clippers on Monday night.

Valanciunas made all seven of his 3-point attempts in the first half before finishing 7-for-8 from long distance.

Brandon Ingram added 27 points and Herbert Jones scored 16 for the Pelicans, who have won three of four for the first time this season.

Reggie Jackson added 19 points and Serge Ibaka scored a season-high 13 off the bench for the Clippers, who were coming off a 105-90 loss to the visiting Golden State Warriors on Sunday afternoon and have dropped five of seven overall.

Valanciunas scored 29 points in the first half as the Pelicans built a 67-52 lead.

The Clippers briefly cut the deficit back to single digits on a drive by Jackson with 9.6 seconds left in the third quarter, but Garrett Temple sank a 3-pointer at the buzzer to increase the lead back to 90-78 entering the fourth.

George pulled the Clippers within eight points three times midway through the fourth, but Los Angeles pulled its starters when down by 17 with 2:56 left.

The Clippers made their first five shots to start the game, but the Pelicans made seven of their first eight to move out to an 18-11 lead.

New Orleans led by as many as 19 in the first quarter before taking a 37-22 edge into the second.

Valanciunas sank 3-pointers on three straight possessions to make it 60-39 with 4:47 left in the half, and the Pelicans ultimately took a 15-point lead into the break.