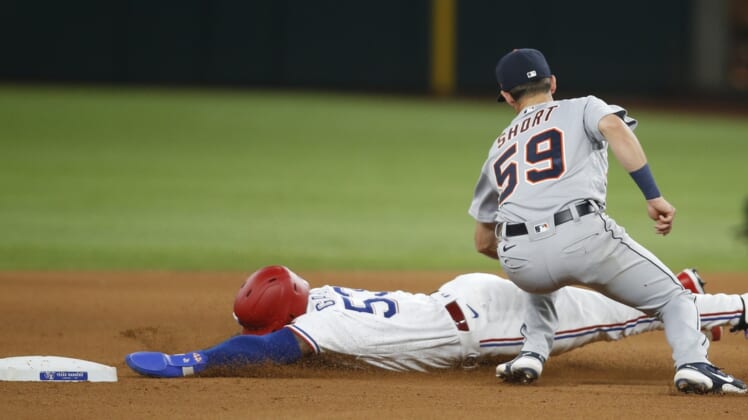 John Hicks homered for the fourth time in as many games and drove in three runs as the Texas Rangers evened their three-game series against the visiting Detroit Tigers with a 10-5 victory on Tuesday.

Adolis Garcia and Brock Holt added solo homers and David Dahl contributed three hits and two RBIs for Texas, which won for the seventh time in its last 11 games.

The Tigers’ three-game winning streak came to an end despite homers from Robbie Grossman, Eric Haase and Jake Rogers.

Texas broke a 5-5 tie with three runs in the seventh. Adolis Garcia and Joey Gallo began the one-out rally with back-to-back singles against Daniel Norris (0-3).

Joe Jimenez replaced Norris and was greeted by Hicks, whose single scored two runs when the ball skipped under Haase’s glove in left field. Dahl followed with an RBI double to right.

John King (7-5) earned the victory despite giving up four runs in two innings. The Rangers scored in double figures for the fourth time this season and the first since June 12.

Detroit broke a scoreless tie in the fourth on Grossman’s one-out solo homer off Dane Dunning.

Grossman’s blast was the only hit allowed by Dunning, who gave up one run with one walk and six strikeouts over five innings.

Texas responded with four runs in the bottom half of the fourth. Hicks belted a two-run homer off Jose Urena and Isiah Kiner-Falefa added a two-run double.

Hicks, who was recalled from Triple-A Round Rock last Tuesday, became the first player in franchise history to hit four homers in his first four games with the team.

Urena is winless in his last seven starts after allowing five runs on six hits over 4 2/3 innings.

Texas moved ahead 5-1 on Dahl’s RBI double in the fifth before Detroit answered with Rogers’ leadoff homer in the sixth.

The Tigers pulled even in the seventh when King surrendered Haase’s pinch-hit, three-run homer to right field.

Texas added two insurance runs in the eighth on solo homers by Holt and Gallo off Bryan Garcia.