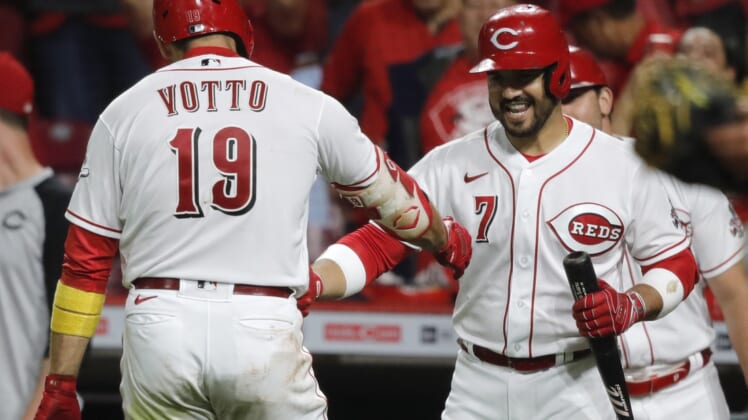 Votto’s career-high fourth multi-homer game of the season gives him a team-leading 33 homers to lead the Reds (78-73), who won for just the ninth time in 25 games to remain three games behind the St. Louis Cardinals in the race for the second National League wild-card spot.

The Cardinals (80-69) beat the division-leading Milwaukee Brewers for their ninth straight win on Monday.

Votto added an eighth-inning single and walked twice to reach base in all five plate appearances.

The comeback matched the biggest this season for the Reds, who fought back from a 6-1 hole in Colorado on May 16 in a 7-6 win. The win also gave Cincinnati its 13th straight victory over Pittsburgh at Great American Ball Park, their most consecutive home wins against Pittsburgh since 18 straight between 1939-1940.

Luis Cessa (5-2) struck out three and retired all four batters he faced in relief of struggling starter Vladimir Gutierrez to earn the win. Mychal Givens pitched the ninth in a non-save situation. Right-handed reliever Cody Ponce (0-5) surrendered the tying and go-ahead homers to suffer the loss.

Yoshi Tsutsugo hit the first pitch he saw from Gutierrez in the first inning for a home run to right. Bryan Reynolds followed that up with a home run of his own, his team-leading 24th of the season, to put the Pirates up 2-0.

Gutierrez failed to reach four innings for the fourth time in five starts and showed more signs of late-season rookie fatigue. The right-hander walked his opposing starting pitcher Dillon Peters on four pitches to start the third inning. The Pirates capitalized by scoring three more runs off Gutierrez, highlighted by and RBI single from Tsutsugo and a sacrifice fly by Reynolds.

The Reds appeared hopeless with no hits through the first 2 2/3 innings against Peters. But Jonathan India’s walked sparked a four-run, two-out rally, highlighted by Votto’s two-run homer to close Pittsburgh’s lead to 5-4.

The Reds pulled even on Votto’s solo shot in the fifth, his third homer in as many at-bats dating to a pinch-hit homer in the eighth inning Sunday against the Los Angeles Dodgers. Suarez went back-to-back with his 27th homer to center, putting the Reds ahead 6-5.

The start of the game was delayed one hour, 25 minutes due to rain.