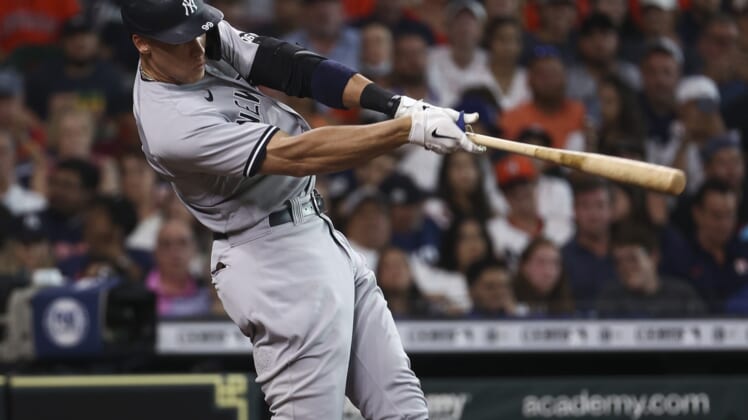 Gerrit Cole enjoyed a triumphant return to Minute Maid Park and the New York Yankees made a solo home run from Aaron Judge stand in their 1-0 road win over the Houston Astros Saturday.

The Yankees clinched the season series by sending the Astros to their second consecutive shutout loss and third of the season. Houston has mustered one run in its last three games.

Cole (9-4), a two-time All-Star and 2019 Cy Young Award runner-up in two seasons with the Astros, made his second start against Houston following his departure for the Bronx after the 2019 World Series. He rebounded nicely from a pair of ragged outings against the Boston Red Sox and New York Mets by surrendering three singles in his first shutout this season.

Cole needed just 34 pitches to complete his first trip through the Astros order and, after issuing walks to Jose Altuve and Michael Brantley in succession to open the fourth inning, rallied with a strikeout of Yuli Gurriel before inducing an inning-ending double play from Yordan Alvarez.

Cole allowed singles to Abraham Toro with one out in the fifth, Gurriel leading off the seventh and Altuve to open the ninth. He threw a career-high 129 pitches. Cole did not allow a runner past second base and ended his outing with strikeouts of Gurriel and Alvarez. Cole finished with 12 strikeouts.

Judge clubbed his 21st home run 419 feet to left-center field for the lone run of the contest.

Astros right-hander Zack Greinke (8-3) departed after working four innings, surrendering one run on three hits with one walk and three strikeouts. He threw 65 pitches, 34 for strikes.

He retired the side in order only once, doing so on 12 pitches in the top of the first inning. He worked around a leadoff double from Giancarlo Stanton and a one-out Gio Urshela single in the second inning and a one-out double from Gleyber Torres in the fourth. Greinke did not appear to labor prior to being lifted and there was no subsequent injury announcement after his departure.

In the third, when he surrendered the two-out home run to Judge, Greinke recorded a pair of called third strikes as well as a ground-ball out off the bat of Tim Locastro to open the frame.