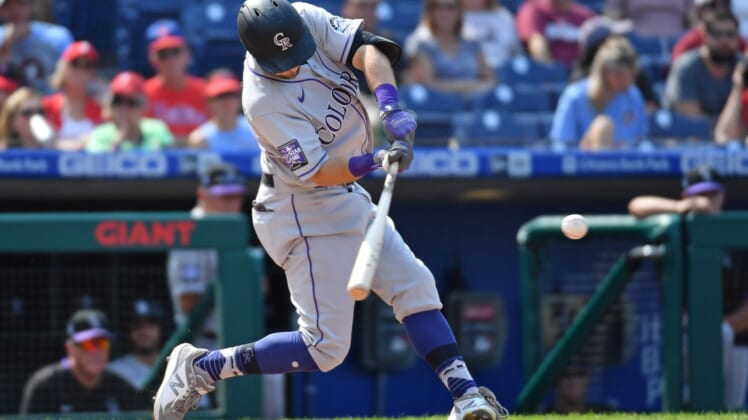 Garrett Hampson homered twice, singled and drove in all five runs to lift the Colorado Rockies past the Philadelphia Phillies 5-4 on Sunday.

Brendan Rodgers added three hits and Elias Diaz had two hits and two runs for the Rockies (66-78), who won three of four in the series.

Ashton Goudeau (1-0) earned the win in relief and Carlos Estevez earned his seventh save.

Bryce Harper homered and J.T. Realmuto contributed three hits and an RBI for the Phillies (72-71).

Philadelphia fell 4 1/2 games behind the Atlanta Braves for first place in the National League East after the Braves won Sunday.

Phillies starter Aaron Nola gave up five hits and three runs with 10 strikeouts and no walks in 5 1/3 innings. Nola surpassed 200 strikeouts for the season during the outing.

After a pair of walks, Realmuto gave the Phillies a quick 1-0 lead with an RBI double in the first inning.

The Rockies struck out six times and had just one hit through the first three innings.

In the fourth, Nola lined an RBI single to right with two outs to score Realmuto from second for a 2-0 advantage.

Diaz singled with one out for Colorado in the fifth. Colton Welker followed with a single to right as the ball landed in front of Harper, who looked to be struggling with the sun. Hampson then laced a three-run homer to left for a 3-2 Rockies lead.

The Phillies tied the game at 3 in the sixth when Goudeau threw a wild pitch, allowing Realmuto to score.

Hampson hit his second homer, a two-run shot to left off Neris, for a 5-3 Colorado lead in the seventh.

When Harper launched a solo homer in the eighth, his 32nd of the season, the Phillies closed within 5-4.

Freddy Galvis opened the bottom of the ninth with a single and advanced to second on a sacrifice bunt by Ronald Torreyes. But pinch hitter Andrew McCutchen and Odubel Herrera each grounded out to end the game.