Rayan Raveloson and Kevin Cabral each scored a goal in the opening 27 minutes and the Los Angeles Galaxy cruised to a 3-1 victory Wednesday over visiting FC Dallas.

Ethan Zubak scored a goal in the second half and goalkeeper Jonathan Bond made three saves as the Galaxy (8-4-0, 24 points) rebounded from a shutout defeat against Sporting Kansas City on Sunday to win for the third time in their last four games.

The Galaxy tied the Seattle Sounders and Sporting KC for most victories in MLS with eight, but they still trail both teams in the Western Conference standings.

Franco Jara scored in the 71st minute for FC Dallas (2-5-5, 11 points), who remained winless on the road this season with an 0-5-0 mark. It was the first of a three-game road trip for FC Dallas, who also will play five of six games away from home.

Raveloson and Cabral each scored their first career MLS goals after arriving from the French second division. Raveloson was in his second game with the Galaxy, while Cabral was in his eighth.

Raveloson gave LA a 1-0 lead in the 17th minute on a header from in front of the goal off a corner kick from Victor Vazquez.

Cabral made in 2-0 a mere 10 minutes later when he scored with his right foot off a sliding centering feed from Sebastian Lletget, who is set to join the United States Men’s National Team for the upcoming CONCACAF Gold Cup.

Zubak’s first goal of the season came in the 51st minute. FC Dallas defender Ryan Hollingshead tried to head a ball back to his own goalkeeper, Jimmy Maurer, but the pass was intercepted by Zubak, who scored from the right side of goal. Maurer made two saves. 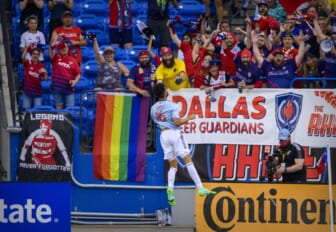 Zubak was at forward in place of Javier “Chicharito” Hernandez, who missed his second consecutive game with a mild calf strain.

The Galaxy also were without Jonathan dos Santos and Efrain Alvaraz, who left to join Mexico’s national team for Gold Cup duty, while Sega Coulibaly was out with a groin injury.