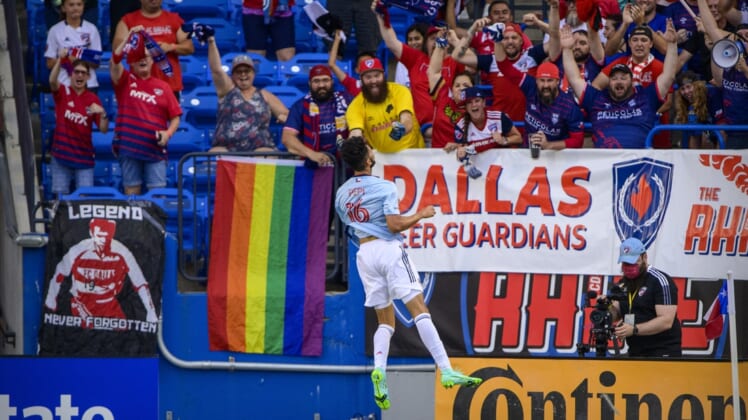 Ricardo Pepi scored twice, including the game-winner early in the second half, as FC Dallas snapped a six-match winless swoon with a 2-1 victory over the New England Revolution on Sunday evening in Frisco, Texas.

FC Dallas (2-4-4, 10 points) won for the first time since a home victory over Portland on May 1. They did it by going toe-to-toe with New England, which came into the match as the hottest team in MLS, having won five straight games.

Pepi made the most of his opportunity. He struck first in the 11th minute when he took an excellent through-pass from Jesus Ferreira, beat New England defender Jon Bell to the ball, and used his right foot to beat Revolution goalkeeper Matt Turner to far post for a goal.

Dallas was the much the aggressor for the first 32 minutes, but the game’s momentum flipped like a switch when Gustavo Bou one-touched a deflected pass from the wing past Dallas keeper Jimmy Maurer in the 33rd minute to knot the score at 1.

Pepi completed his first career brace in the 54th minute, taking a long pass from Ryan Hollingshead before moving across the face of the box, making a little limp-leg move, and unleashing a right-footed shot to Turner’s left and into the net.

Both teams were playing their third matches in a nine-day period and, at the end, the visitors were the worse for the wear.

The winning streak for the Revolution (7-2-2, 23 points) has rolled them to the top of the Eastern Conference standings with their stellar play since May.