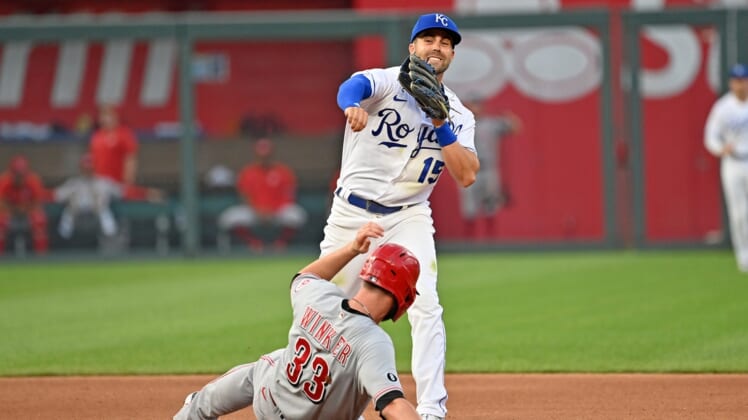 Suarez was hitting just .176 prior to hitting his 17th home run of the season.

Vladimir Gutierrez (4-3) earned the win. He allowed two runs on five hits in six innings. He walked two and struck out six.

The Royals, who snapped a 12-game streak of not having a starting pitcher last more than four innings Sunday, saw Mike Minor allow one run on two hits in his first six innings.

But Minor allowed Nick Castellanos’ game-tying home run leading off the seventh and walked the next two batters, bringing his total to three and ending his night. Minor (6-7) gave up four runs on three hits with six strikeouts. Reliever Kyle Zimmer gave up Suarez’s homer on the first batter he faced.

The Reds grabbed the lead in the second inning after getting the first two runners on base. Tyler Stephenson led off with a double to left and he moved to third on a single by Joey Votto. But Suarez grounded into a double play, scoring Stephenson.

The Royals tied it in the third. Nicky Lopez led off with a double to right. Whit Merrifield flied to right, moving Lopez to third. Lopez scored on a double by Carlos Santana, making the score 1-1.

The Royals put the first two runners on base in the sixth on a walk to Santana and a single by Salvador Perez. Ryan O’Hearn lined out to right, but Jorge Soler ripped a double to the wall in left to score Santana — Soler’s first RBI in 18 games. It was Soler’s first go-ahead RBI of the season.

Tyler Naquin’s RBI single in the ninth gave the Reds their sixth run.