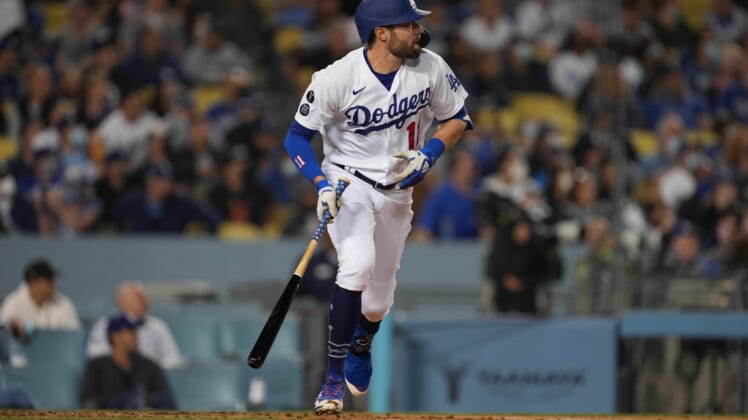 Corey Seager hit the last of four home runs in the eighth inning as the Los Angeles Dodgers pulled off an improbable rally with an 11-9 victory over the visiting San Diego Padres on Wednesday to keep their National League West title hopes flickering.

AJ Pollock hit two home runs, including one in the eighth, while Max Muncy and Cody Bellinger also went deep in the fateful five-run inning as the Dodgers rallied from a four-run deficit in the seventh.

Mookie Betts had a home run in the seventh inning in a game where the Dodgers led 5-1 before the Padres scored eight consecutive runs.

Dodgers right-hander Max Scherzer, looking to make a last impression toward a National League Cy Young Award bid, was roughed up to the tune of six runs allowed (five earned) on a season-high 11 hits over 5 1/3 innings.

It was the most runs Scherzer gave up since he allowed seven to the Padres on July 8 as a member of the Washington Nationals.

The Dodgers scored four times in the first inning and led 5-1 after two, but the Padres began their charge on a Manny Machado two-run home run in the third inning, his 28th.

The Padres tied the game at 5-all in the fourth inning when Wil Myers scored on Seager’s fielding error, then took a 6-5 lead on a Myers RBI triple in the sixth.

San Diego went up 9-5 in the seventh inning on an RBI double from Tommy Pham and a two-run single from Trent Grisham.

The Los Angeles rally began in the bottom of the inning with Betts’ home run, his 22nd, to pull the Dodgers within 9-6.

Seager put the Dodgers back on top with a two-run home run on a 3-1 changeup from Nabil Crismatt. It was Seager’s 13th of the season. Padres right-hander Emilio Pagan (4-3) was charged with four runs in the eighth.

Dodgers left-hander David Price (5-2) earned the victory with a scoreless eighth inning, while Kenley Jansen earned his 37th save by striking out the side in the ninth.