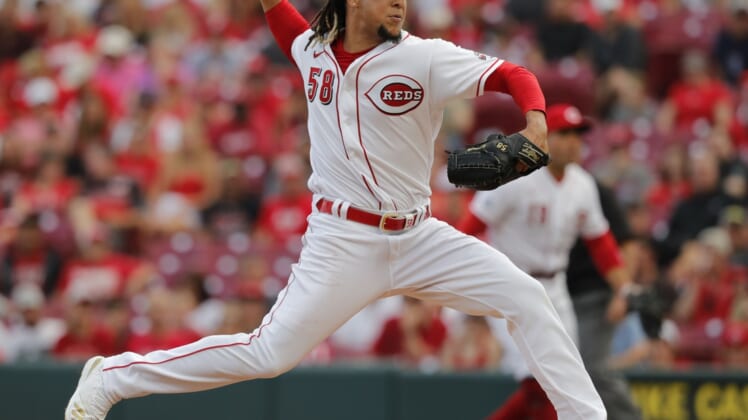 Kyle Farmer tied the game with a one-out solo homer to center off closer Mark Melancon in the bottom of the ninth and rookie Tyler Stephenson won it with a two-out single to right scoring Jonathan India as the Cincinnati Reds salvaged the final game of a three-game series with a dramatic 5-4 win over the visiting San Diego Padres Thursday night.

Melancon (1-1), who took the loss, had converted 25 of 28 save chances this season and the Padres had won their past 88 games when entering the ninth inning with the lead and were 42-0 this season.

Art Warren (1-0) pitched the ninth to record his second major league win and first with Cincinnati.

San Diego took a 4-3 lead into the ninth when rookie infielder Alejo Lopez, who went 4-for-5 in just his second major league start, made an errant throw to first allowing Manny Machado to score in the eighth.

After reliever Austin Adams loaded the bases with two outs in the seventh, lefty Tim Hill retired Jesse Winker on one pitch, a groundout to second to escape the jam.

The Reds, who had lost their previous six games with San Diego this season, earned the win to get back to .500. The Padres lost for just the second time in 13 games and missed a chance to join the Giants and Dodgers as 50-win teams atop the NL West.

San Diego starter Ryan Weathers was pitching in the same city where his father, David Weathers, pitched as a reliever for six years over two stints. His father and mother were in attendance in the Padres family section behind the visitors’ dugout.

Reds starter Luis Castillo did not allow a hit over the first four innings. But as was the case in the first two games of the series, rain interrupted play prior to the top of the fifth. Following a 52-minute delay, Castillo walked Manny Machado and then gave up an infield single to Eric Hosmer.

Aristides Aquino doubled home Lopez in the fifth to give the Reds a 3-1 cushion, but Castillo ran out of steam in the seventh when the Padres loaded the bases with one out. Pinch-hitter Tommy Pham singled home Machado and Hosmer to tie the game at 3.