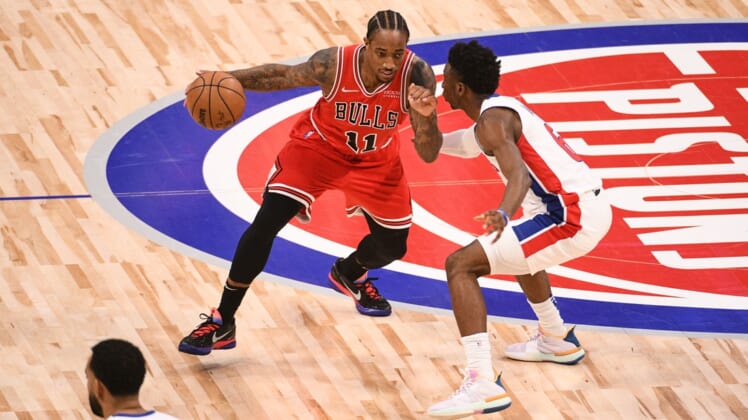 Zach LaVine had 34 points, seven rebounds and four assists and the visiting Chicago Bulls opened their season with a 94-88 victory over the Detroit Pistons on Wednesday.

Nikola Vucevic added 15 points and 15 rebounds, while Lonzo Ball chipped in 12 points and four assists in his Chicago debut. Ball was acquired in a sign-and-trade with New Orleans this summer.

Guard Cade Cunningham, the No. 1 pick of this year’s draft, did not play due to an ankle sprain.

The Pistons emerged from a poor-shooting first half with a 44-40 lead. Detroit shot 36.7 percent, while Chicago made 41.9 percent of its shots. They shot a combined 5-for-23 on 3-point attempts.

Grant was the only Detroit player in double figures with 13 points. Vucevic already reached a double-double for the Bulls with 10 points and 11 rebounds.

The game remained tight throughout the third quarter. The Pistons committed three turnovers in the final minute, allowing the Bulls to pull ahead 71-69 entering the fourth. Bulls reserve guard Alex Caruso had a pair of steals and an assist during that span.

DeRozan scored with three minutes left to give Chicago a four-point lead.

Grant then missed in the lane and LaVine knocked down two more free throws.