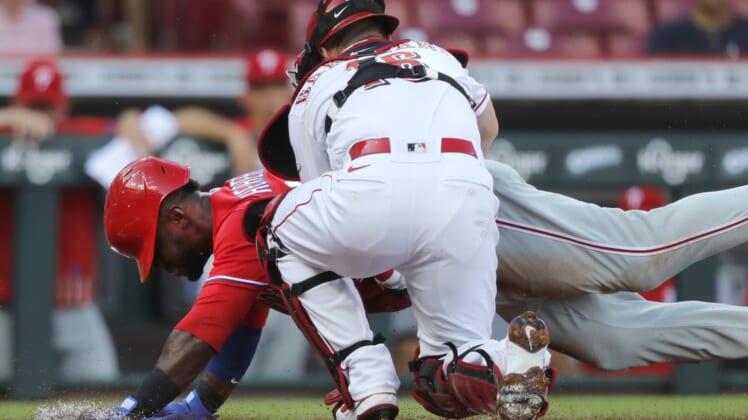 Nick Castellanos continued his MVP-caliber first half of 2021 with a go-ahead grand slam and a career-high seven RBIs as the Cincinnati Reds rallied late for a 12-4 win Monday night over the visiting Philadelphia Phillies.

It was the sixth career slam for the red-hot Castellanos, who has 50 RBIs and leads the National League with a .347 average. He went 3-for-5 in the make-up game for a rainout on June 2.

Castellanos’ slam — his 15th homer of the season — came with two out in the seventh inning off Phillies reliever Neftali Feliz (0-1) and wiped out a 4-2 deficit. Feliz was making his first major league appearance since Aug. 13, 2017, for the Kansas City Royals at the Chicago White Sox.

Reds rookie infielder Alejo Lopez, called up earlier in the day from Triple-A Louisville, made his major league debut when he started the seventh-inning uprising. As a pinch-hitter, he singled on the first big league pitch he saw from reliever Bailey Falter.

Feliz entered the game and issued a walk and recorded a strikeout for the second out, but he hit Jesse Winker. Castellanos then clubbed an 0-1 pitch for the slam to left-center field.

The Reds added six more in the eighth off the woeful Phillies bullpen, which blew its 21st save opportunity of the season. With chants of M-V-P ringing throughout Great American Ball Park, Castellanos came up in the eighth and doubled home Jonathan India.

Heath Hembree (2-3) pitched a scoreless seventh in relief of starter Wade Miley and recorded the win.

Reds starter Wade Miley worked a walk on a full count against Phillies starter Spencer Howard to open the third inning. India lined out to center before Winker doubled to right-center. A lumbering Miley was held at third. But Miley and Winker then scored on Castellanos’ single to center, giving the Reds a 2-0 lead.

The lead was short-lived as Bryce Harper started a two-run rally off Miley with a single in the fourth. Alec Bohm followed with a double to left-center that scored Harper from first. Ronald Torreyes grounded into a fielder’s choice that tied the game, 2-2.

The Phillies took the lead in the fifth on Bohm’s two-out single, which scored Herrera, and Torreyes’ infield single then scored Andrew McCutchen, putting Philadelphia ahead, 4-2. It marked the first time Miley allowed more than three runs since his start in Colorado after his no-hitter on May 14, a week after his no-hitter in Cleveland.

Miley allowed eight hits and walked three, while striking out seven. In four innings of relief, Falter allowed one run on two hits with a walk and six strikeouts.

Shogo Akiyama started in place of Reds center fielder Tyler Naquin, who was scratched just before first pitch with a sore right wrist.