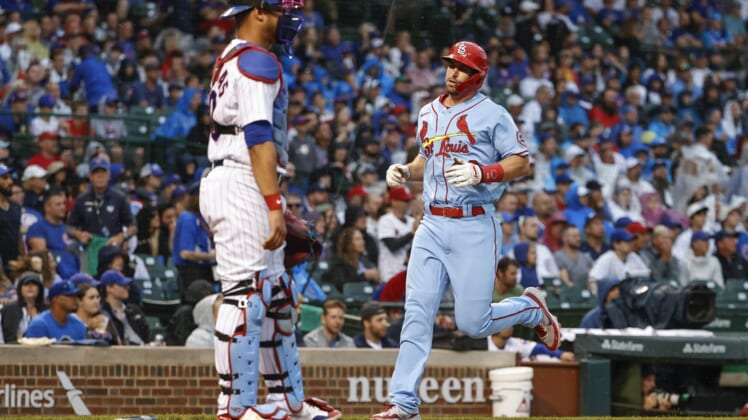 Paul Goldschmidt, Tommy Edman and Paul DeJong each homered in the fifth inning to power the St. Louis Cardinals to a 6-0 win over the host Chicago Cubs on Saturday night.

Matt Carpenter also drove in a run for St. Louis, which evened the series at one win apiece with the rubber match slated for Sunday afternoon. It was the Cardinals’ first victory in five games at Wrigley Field this season.

The Cubs were shut out for the second time in three games and the eighth time this season. Chicago has dropped 13 of its past 15.

Cubs right-hander Zach Davies (5-6) surrendered three runs on seven hits in 4 1/3 innings. He walked two and struck out three before giving way to left-hander Adam Morgan, who allowed two runs in one-third of an inning.

The Cardinals opened the scoring in the first inning. Goldschmidt drew a one-out walk, advanced to second base on another walk by Tyler O’Neill and came home to score on a single by Carpenter.

A five-run fifth inning increased the Cardinals’ lead to 6-0.

Goldschmidt led off the frame with a solo shot to left field for his 13th homer of the season. His 441-foot blast soared over the Wrigley Field bleachers and landed outside of the stadium on Waveland Avenue.

DeJong capped the big inning with a two-out, two-run homer to center field. His towering fly ball carried just long enough to land in the basket atop the wall in center field for his 12th homer and second in as many days.