WATCH: Brock Bowers leads No. 2 Georgia in rout of Vanderbilt 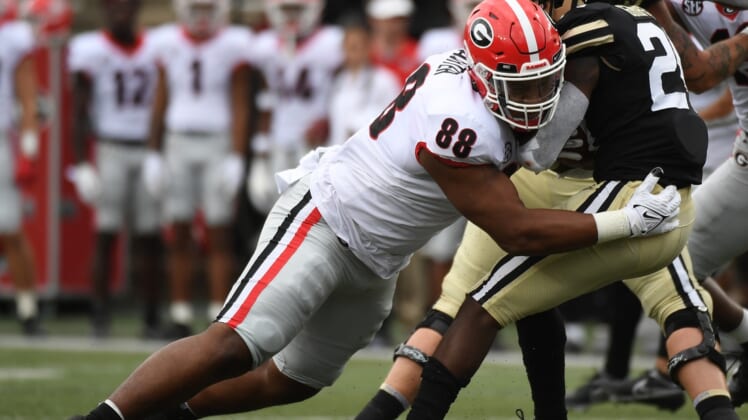 Bowers, a true freshman, finished with four receptions for 69 yards and two touchdowns. He added a 12-yard scoring run.

The Commodores (1-3, 0-1) finished with just four first downs and 77 yards of offense. Georgia rolled up 524, including 334 during a first half in which it scored five touchdowns and a field goal.

Georgia needed just five plays to go 49 yards after a short Vanderbilt punt. Bowers scored on a 12-yard end-around to give the Bulldogs a 7-0 lead less than four minutes into the game.

After another short punt by Vanderbilt rolled out of bounds at the Georgia 37-yard line, the Bulldogs needed just six plays to double their lead. JT Daniels capped the drive with a 25-yard touchdown pass to Bowers with 8:02 left in the first quarter.

Vanderbilt fumbled away the ensuing kickoff, with Christopher Smith scooping the ball and returning it to the Commodores’ 4-yard line. Two plays later, Zamir White plowed into the end zone from 1 yard out for 21-0 lead with 7:11 left in the first quarter.

Georgia needed just 29 seconds to score again. Smith intercepted Ken Seals’ pass and returned it to the Commodores’ 29-yard line. Two plays later, Daniels found McConkey for a 12-yard touchdown and a 28-0 lead with 6:42 left in the first quarter.

Georgia capped its first-quarter outburst when McConkey found the end zone for the second time. McConkey raced 24 yards untouched on an end-around for a 35-0 lead with 3:08 left.

Joseph Bulovas missed a 49-yard field goal on the Commodores’ next possession.

Stetson Bennett replaced Daniels, who was 9-for-10 for 121 yards and two touchdowns.

Bennett threw an interception on his first series and the Bulldogs turned the ball over on downs at Vanderbilt’s 3-yard line on their next possession. Jack Podlesny capped the first half with a 31-yard goal for a 38-0 lead with 15 seconds left.

Bowers found the end zone for the third time on a 29-yard pass from Bennett to open the second half and Kenny McIntosh added a 4-yard touchdown run on Georgia’s next series.