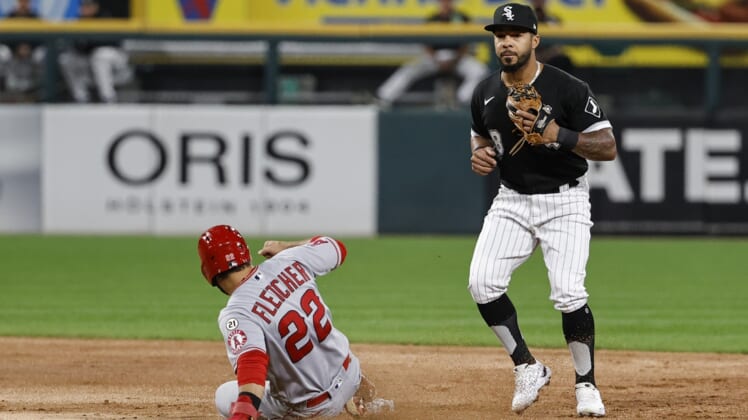 Brandon Marsh hit a go-ahead homer in the eighth inning and the visiting Los Angeles Angels held on for a 3-2 win over the Chicago White Sox on Wednesday night.

Phil Gosselin and Luis Rengifo added one RBI apiece for Los Angeles (71-74), which evened the series at one win apiece heading into Thursday’s rubber match.

Yoan Moncada homered for Chicago (83-62), which was going for its third win in a row. Yasmani Grandal finished 1-for-4 with an RBI.

Angels right-hander Mike Mayers (5-5) earned the victory in relief after pitching a scoreless inning and striking out the side.

White Sox right-hander Michael Kopech (4-3) took the loss after giving up Marsh’s tiebreaking homer. It was the only hit that he allowed in two innings and he struck out three batters.

Angels closer Raisel Iglesias worked a scoreless ninth to record his 32nd save in 37 chances this season. He escaped trouble after Eloy Jimenez doubled off the wall in left-center field on the first pitch of the inning.

Marsh tracked an outside pitch and lofted it to the opposite field for the second homer of his rookie campaign. It was his first blast since Aug. 25 against the Baltimore Orioles.

The Angels opened the scoring in the top of the third. Gosselin singled to shallow right field to drive in Luis Rengifo, who had reached on a one-out single.

The White Sox evened the score at 1-1 in the fourth. Moncada drilled a pitch over the wall in right field for his 12th homer of the season.

Rengifo gave the Angels a 2-1 lead in the sixth. Marsh singled to right field, advanced to second base on a single by Juan Lagares and scored on Rengifo’s sacrifice fly to right field.

Chicago pulled even at 2-2 after the heart of its lineup came through during the bottom of the sixth. Jose Abreu belted a double to deep left field and scored moments later on a single to right by Grandal.