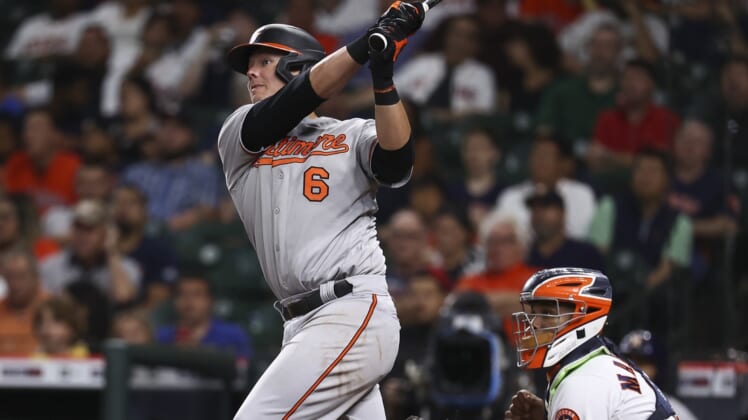 Austin Hays slugged a two-run home run in the ninth inning and Ryan Mountcastle continued his torrid month as the visiting Baltimore Orioles defeated the Houston Astros 9-7 on Monday.

Hays snapped a 4-4 deadlock with his seventh homer, driving in Cedric Mullins with his blast off Brandon Bielak (2-3). Mullins opened the ninth with his third single of the contest. Pedro Severino added a two-run double that scored Mountcastle and Ryan McKenna, and Ramon Urias knocked in Severino with a double.

Baltimore improved to 2-22 over its past 24 road games and 2-11 at Minute Maid Park since the start of the 2016 season. The Astros have dropped three of their past four overall following an 11-game winning streak.

Mountcastle, who finished 2-for-3 with two walks and three RBIs, has hit safely in 18 of 24 games this month. He leads American League rookies with 32 hits, nine homers and 24 RBIs in June.

The Orioles fashioned a pair of two-out rallies against Astros starter Zack Greinke, the first coming in the third inning. Baltimore strung together three consecutive two-out singles, with Mountcastle delivering the third hit of the frame to drive home Hays.

Mountcastle struck again with two outs two innings later, drilling a 2-2 fastball from Greinke the opposite way and over the wall in right field for a two-run shot. Mountcastle smacked his 14th home run 382 feet and pushed the Orioles back in front a half-inning after the Astros forged a 2-1 advantage.

The Astros’ two-run fourth came without the benefit of a timely hit. Kyle Tucker drove home Yordan Alvarez with a sacrifice fly to deep center field to knot the score at 1-1, and Jose Altuve greeted Orioles reliever Cole Sulser with a bases-loaded walk that forced in Carlos Correa.

Michael Brantley, after getting ahead in the count 3-0, popped out in foul territory to end the threat.

The Astros loaded the bases again in the seventh, and Tucker and Myles Straw worked run-scoring walks off Tanner Scott to erase a 4-2 deficit. Tyler Wells entered in relief of Scott and put out the fire with a pair of strikeouts.

Houston finished 2-for-13 with runners in scoring position, with both hits coming during a three-run rally in the bottom of the ninth.

Paul Fry (3-3) got the win despite allowing three runs in 1 1/3 innings. Adam Plutko recorded the final two outs for his first save of the season.