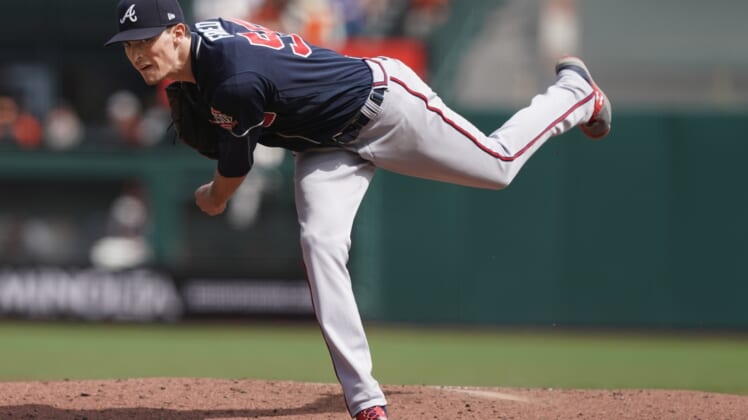 Max Fried pitched seven shutout innings, Eddie Rosario hit for the cycle and Adam Duvall ended a scoreless tie with a two-run home run in the seventh, sending the visiting Atlanta Braves to a 3-0 victory over the San Francisco Giants in the finale of their three-game series Sunday afternoon.

By snapping a four-game losing streak, the Braves (77-70) assured they would enter the final two weeks of the regular season in first place in the National League East.

Their closest pursuer, the Philadelphia Phillies (76-72), played a late game in New York against the Mets on Sunday night. The Phillies began that game 1 1/2 games behind Atlanta.

Despite Sunday’s loss, the Giants (97-53) won two of three in the series, which is what they needed to remain ahead of the Los Angeles Dodgers (96-54) in the NL West. San Francisco will take a one-game lead into the final 12 games of the regular season.

Rosario had a double in the second inning, a triple in the fifth, a homer in the seventh and a single in the ninth to finish 4-for-4 with an RBI and a run scored.

After the Braves managed just four hits against San Francisco starter Anthony DeSclafani (12-7) and the Giants just three against Fried (12-7) in the first six innings, Austin Riley led off the seventh with a double and trotted home six pitches later when Duvall hit his 36th homer, to center field.

DeSclafani was pulled at that point, having allowed two runs and six hits in six-plus innings. He struck out six without issuing a walk.

Rosario then greeted reliever Zack Littell with a first-pitch homer to right field, increasing the Atlanta lead to 3-0. The homer was Rosario’s 12th of the year.

Rosario completed the cycle when he singled leading off the ninth against the Giants’ fifth pitcher, Kervin Castro.

Luke Jackson pitched a scoreless eighth and Will Smith a 1-2-3 ninth for his 33rd save, completing Atlanta’s 16th shutout of the season. Fried has started three of them.

The Giants got just two baserunners into scoring position in the game, the first coming when Donovan Solano singled to open the second and was sacrificed to second by DeSclafani. But Fried got Darin Ruf on a ground ball and Austin Slater on a fly to keep the game scoreless.

Slater singled and stole second with two outs in the sixth before Bryant struck out.

Joc Pederson backed Rosario’s four-hit effort with two hits for the Braves, who outhit the Giants 11-4.