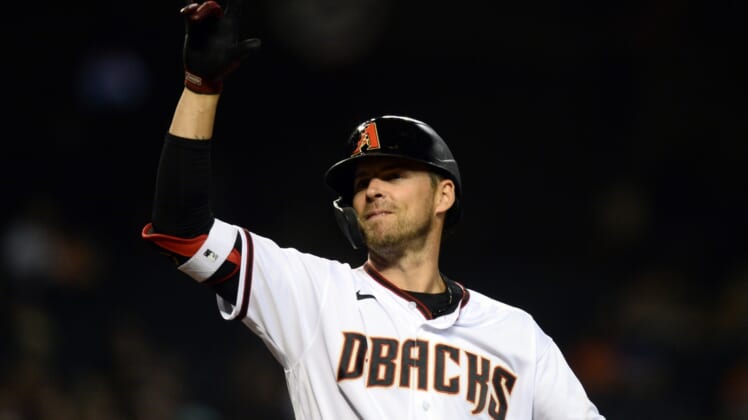 Josh Reddick slugged a go-ahead two-run homer and Pavin Smith added a solo shot to help the Arizona Diamondbacks post a 5-3 victory over the San Francisco Giants on Thursday night in Phoenix.

Reddick had three of his team’s seven hits as Arizona won for just the eighth time in the past 55 games.

Merrill Kelly (5-7) pitched seven strong innings while winning his third straight start. The right-hander ended his team’s four-game skid and is the only Arizona pitcher to win over the club’s past 27 games.

Wilmer Flores smacked a two-run homer and Mike Yastrzemski hit a solo shot for the Giants, who lost their season-worst fourth consecutive game. The loss was San Francisco’s first in seven games against the Diamondbacks this season.

David Peralta tripled to lead off the fourth against Giants right-hander Johnny Cueto, and Reddick followed with a two-run blast that barely eluded the leap of Yastrzemski in right to give Arizona a 4-3 edge.

The Diamondbacks tacked on another run in the fifth when Smith hammered a 438-foot leadoff blast over the fence in right.

Kelly gave up three runs and seven hits in his latest solid outing. He struck out seven without issuing a walk.

Noe Ramirez struck out two in a scoreless eighth and fellow right-hander Joakim Soria worked out of a jam in the ninth to record his first save of the season.

Flores drew a walk to start the ninth and Steven Duggar followed with a single to right. Soria then induced Donovan Solano to ground into a double play and struck out pinch hitter Darin Ruf to post the first save for a Diamondbacks pitcher since May 30.

Cueto (6-4) gave up five runs and six hits over five innings. He struck out five and walked two.

Yastrzemski homered to right with one out in the first for the Giants. Arizona tallied twice in the second, with Josh VanMeter stroking a two-out RBI double and later scoring on Kelly’s single.

San Francisco took a 3-2 lead in the fourth when Brandon Crawford singled with one out and Flores followed with a two-run blast over the fence in left.