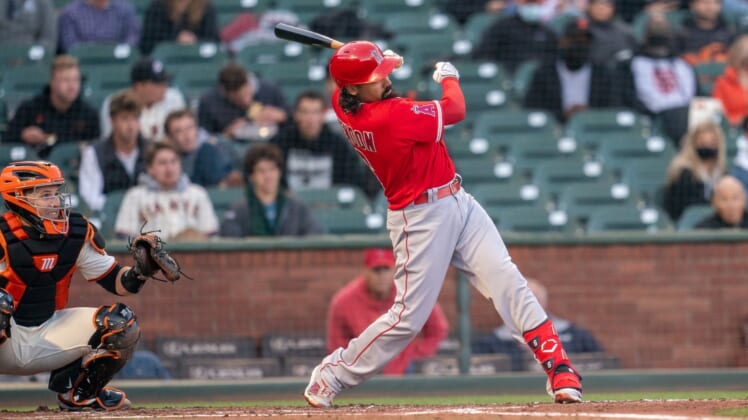 Anthony Rendon drove in a season-best five runs and pitcher Andrew Heaney contributed to two big innings at the plate with a single and his first career walk Tuesday night as the visiting Los Angeles Angels ended the San Francisco Giants’ four-game winning streak with an 8-1 interleague victory.

In completing a 3-3 split in a San Francisco Bay Area visit that began with two wins and two losses in Oakland, the Angels beat up on Giants starter Alex Wood (5-3) for three runs in the third inning and five more in the fourth.

Heaney (3-3), who has spent seven of his eight seasons in the American League, got the third-inning uprising going with a one-out single for just the third hit of his career.

Two walks and a wild pitch advanced Heaney around the bases to open the scoring, and when Rendon smacked a two-out, two-run single to center field, the Angels had a 3-0 lead.

Batting because the game was at a National League ballpark, Heaney came to the plate again in the fourth after an RBI double by Max Stassi and drew a walk, his first in 25 career plate appearances.

Two more walks, the second by reliever Matt Wisler after Wood’s exit, produced the inning’s second run, after which Rendon cleared the bases with a three-run double to left, making it 8-0.

Heaney, who struck out in his only other at-bat, worked 6 1/3 innings, allowing one run and five hits. He walked one and struck out seven.

The Giants’ only run came in the seventh on consecutive singles by Steven Duggar, Wilmer Flores and Donovan Solano.

Wood was charged with seven runs on four hits and four walks in 3 2/3 innings. He struck out two.

Rendon finished with three hits, the third time he’s collected three in a game this season.

It was his first game with five or more RBIs since he drove in five for the Washington Nationals in a June 2019 game against the White Sox.

David Fletcher, who was slotted ninth in the order, one spot behind Heaney, scored twice, as did Angels leadoff man Justin Upton.

Duggar and Flores had two hits apiece for the Giants, who won the series opener 6-1 on Monday.